Hail of notifications incoming... just be thankful 8 passed you by 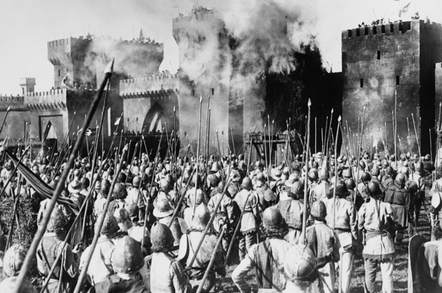 'Your mother was a hamster, and your father smelt of elderberries'

Updated Windows 7 holdouts have been warned to expect a notification suggesting that perhaps an upgrade might be in order.

Matt Barlow, corporate veep for Windows, has promised Windows 7 users are to receive a "courtesy reminder" that support is running out for the venerable OS as 14 January 2020 looms large.

Barlow also noted that Office 2010 ends its support run shortly thereafter, but for now the focus is on Windows 7.

The helpful notifications will doubtless send a shiver of déjà vu down the spines of users who found themselves on the receiving end of Microsoft's increasingly shrill exhortations to switch to Windows 10 for free during the operating system's first year.

The "free upgrade" notification back in the day was a bit confusing, and some users reported Windows 10 sidling up to their systems without permission.

Microsoft quietly killed the nagware – after all, 350 million or so devices running Windows 10 after the first year was mission accomplished. That billion couldn't be far away, right?

While the official freebie upgrade offer is long gone, Microsoft has clearly learned lessons from the nagware experience. This time around the notifications will only appear a "handful" of times, and users will have an option to "do not notify me again".

Barlow also insists the notification is for "information only" and clicking "learn more" will send the user off into a world full of shiny new hardware and software.

We checked with Microsoft to find out what "handful" actually meant. Some people have pretty big hands (although the claws of this Vulture have been described as "Trumpian" after remarking on the size of the iPhone XR). We also asked whether enterprises would be able to able head the things off before weary PFYs start fielding the inevitable support calls. ®

A Microsoft spokesperson got in touch to let us know that "Consumers can expect to begin to receive notifications from Microsoft on Windows 7 EOS in April."

The key word there is "consumers". Enterprises shouldn't be troubled by the messages, as the spokesperson confirmed: "Notifications will be for non-commercial users only."

And, of course, you can turn the things off.

So expect those first phone calls from confused relatives to start from next month.