We are 'heroes,' says police chief whose force frisked a photographer 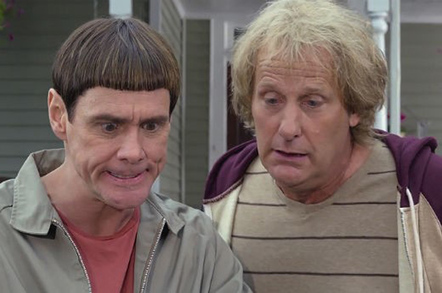 The chief constable of Sussex Police has labelled his staff “everyday heroes” for using the UK's Terrorism Act to stop and search a photographer taking pictures of Hove Town Hall.

Professional snapper Eddie Mitchell was detained for an hour by police in the south coast town on Thursday (May 4). A police employee who was not a sworn constable* decided, according to Mitchell’s detailed account, to demand an explanation of what he was doing while he was taking “general view” photos of the town hall.

Mitchell, who has worked in the area for 18 years and supplies pictures to national newspapers, agencies and the BBC, refused to answer the woman’s questions as she waved a Sussex Police lanyard and ID card in his face.

He did, however, agree to go with her into the town hall, where police have a “pop-up station.” Two constables searched him, citing Section 43 of the Terrorism Act 2000. The relevant parts state:

(1) A constable may stop and search a person whom he reasonably suspects to be a terrorist to discover whether he has in his possession anything which may constitute evidence that he is a terrorist.

(2) A constable may search a person arrested under Section 41 to discover whether he has in his possession anything which may constitute evidence that he is a terrorist.

Detained for over an hour,searched & camera seized under section 43 terror act for taking a GV of Hove Town Hall pic.twitter.com/Wi4HiMDxGx

“They were in a corner because they had to let me go seeing as I hadn’t done anything – and they were so stuck they took a total abuse of power by quoting the Terror Act,” he told Daily Mail Online.

Chief Superintendent Lisa Bell, divisional policing commander for Brighton and Hove, said: “I am satisfied that the action my officers took was completely appropriate when the threat level is at severe, meaning an attack is highly likely,” adding that if Mitchell had “identified himself” to the woman employee, “the matter would have been resolved in minutes.”

The Guardian reported: “Sussex Police were unable to answer questions on what, specifically, about Mitchell’s actions had provoked a reasonable suspicion that he was a terrorist and under what powers a member of its civilian staff had demanded an explanation and a statement from him.”

Following the public outcry at the police’s heavy-handed treatment of Mitchell, who insists he has the “utmost respect for Sussex Police and the work they do,” Chief Constable Giles York weighed in, obviously feeling the pressure.

“The terrorism risk nationally remains severe, and in view of recent events I expect my staff and the public to be vigilant and report unusual activity,” he said in a bizarre statement on the force website. “I totally support and am immensely proud of my officers and staff and I try really hard to recognise personally their ‘everyday heroism’.”

Breaking their own rules

The Association of Chief Police Officers, predecessor to today’s National Police Chiefs Council, issued a policy statement in 2010 after the routine abuse of police powers towards photographers became unignorable.

A letter by the chair of ACPO’s communication advisory group was issued to all police forces in the country, reminding policemen that instead of harassing photographers and misusing the law, they ought to be working with them. A copy of it can be found via the Lancashire and Cheshire Photographic Union’s website, and it says: “There are no powers prohibiting the taking of photographs, film or digital images in a public place. Therefore members of the public and press should not be prevented from doing so.”

This policy has remained in force ever since, including the rebranding of ACPO to the National Police Chiefs’ Council after Theresa May, as Home Secretary, ordered the organisation be shut down.

Sheffield University lecturer Mark Hanna, author of media law bible McNae’s Essential Law for Journalists, said to us: "We all want the police to be vigilant. But ideally the Chief Constable would have admitted clearly that there was no ground ‘to reasonably suspect’ Eddie of being a terrorist, or explained what his officers felt that ground was. The Chief’s statement does not refer at all to the process his officers followed under the 2000 Act. Eddie conducted himself with dignity. The Chief’s statement is ‘flannel’.”

A spokesman for the I’m A Photographer Not A Terrorist campaign group told The Register: “The use of Section 43 of the Terrorism Act – a power requiring reasonable suspicion a person is a terrorist – to detain and search a photographer and view PACE protected journalistic material, is utterly bizarre. Taking photographs of a public building comes nowhere close to establishing ‘reasonable suspicion’ of terrorism.”

Eddie Mitchell has previously come into conflict with police while doing his job. Last year three constables arrested him while he was taking aerial footage of a fire in Surrey. The constables, having handcuffed him, then took it in turns to have a play with his still-airborne drone, which he had been flying at about 150 feet. Mitchell is a licensed drone operator who had the landowner’s permission to be operating there. ®

* Police constables of all ranks swear an oath that admits them into the office of constable. The term “constable” is a bit old-fashioned nowadays and is generally synonymous with “police officer.” Being a constable is what gives police extra legal powers that lets them freely do things normal members of the public would commit a criminal offence by doing, such as kicking down doors and arresting people, Tasering them, etc.

Many police employees are not constables and so do not have these powers, though in various situations they can acquire and exercise some of them. Two examples are police community support officers and police station detention officers, who process prisoners arrested by constables.