But perhaps we’re missing the point. The MobileCinema D10 is not intended for your living room but for a child’s bedroom, or for the occasional mucking about for a laugh. It provides a microphone socket in case you want to play a karaoke DVD, for example, and it will play a slideshow from any CD containing JPG images. 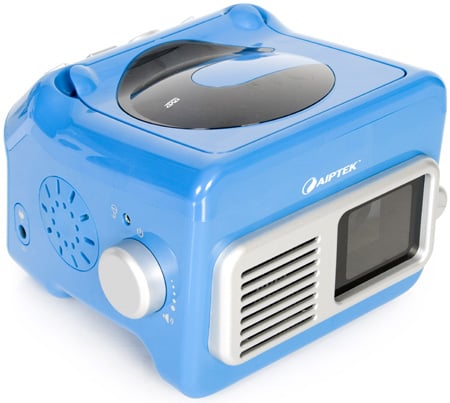 We actually tried it out as background entertainment, showing snowboarding DVDs on the wall during a pre-ski-holiday party. The only challenge was keeping the room lights dim enough not to blank out the projected image: the LED lamp is rated at a mere 13 lumens. Yes, 13. The lamp does not appear to be user-replaceable but we expect LED lamps to last a very long time: probably much longer than the 10,000 hours quoted by the manufacturer.

As long as you understand that it is just a toy rather than a serious challenger to low-cost home cinema projectors, the Aiptek MobileCinema D10 makes a fine novelty gift. It would be great for youngsters watching cartoons in a bedroom during a sleepover, and its cool operation makes it safe for them too. But for anyone wanting an audio-visual treat, stick with your telly instead. ®

Want to know if that hottie has HIV? Put their blood in the DVD player

No, the VCR is not about to die. It died years ago. Now it's VHS/DVD combo boxes' turn

Japan's Funai sold 750,000 units last year, but parts are hard to come by so it's quitting

Only the best DVD quality will do