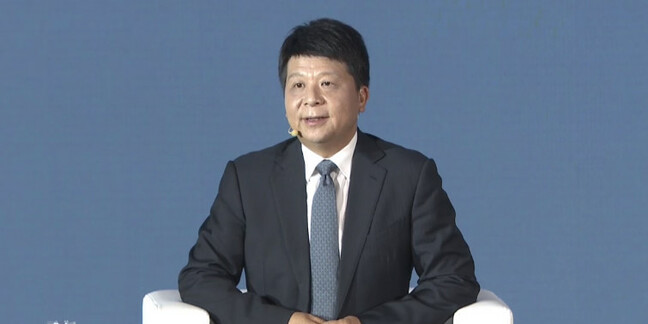 Huawei's rotating chairman has admitted to the world's media that his organisation has been "impacted" by a year of US sanctions against it – and he's quite unhappy with France, too.

Guo Ping emphasised in a press conference this morning that "survival is the key word for us at present" as he answered questions at an event supposed to show off how American sanctions haven't really affected Huawei.

At the end of last week, the US extended its sanctions against Huawei to technology used in chip and semiconductor manufacturing as well as simple buying and selling of Huawei equipment. Ping's speech today was intended to show the Chinese company isn't taking the threats idly.

Addressing Friday's US announcements, Ping – one of three company co-chairmen and current occupier of the top spot – asserted that Huawei was now trying to work around the "arbitrary and pernicious" sanctions by using non-US-derived technology:

Huawei categorically opposes the US Department of Commerce's amendments to foreign product rules targeting Huawei specifically... Since that time Huawei committed to complying with all US government rules and regulations. Despite the fact that a number of industrial and technological elements were withheld from Huawei, we fulfilled our contractual obligations to customers and suppliers.

Ping said that Huawei had boosted its R&D spending by 30 per cent, "most of which went to fixing the holes" in its bucket of available technologies since the US ban went into force. Around 1,000 Huawei hardware board designs, along with "60 million lines of code", have been altered as a result, he claimed.

Despite boasting about the enterprise tech outfit's compound annual growth rate (claimed to be 27 per cent year-on-year), Ping said: "Our business will inevitably be impacted" by the latest sanctions, adding: "In spite of that, as the challenges over the past year have helped us develop a better scheme. We are confident about finding solutions soon."

The rotating chairman also placed heavy emphasis on "customers and suppliers" who he also said opposed US sanctions, though he did not name any.

One country that came in for repeated mentions during Ping's speech and subsequent Q&A was France, a country that China is increasingly unhappy with. In the Huawei context, France's ongoing "digital sovereignty" policy, or "souverainete numerique", threatens to economically displace Huawei from a key EU market through a "buy only Western tech" approach – a policy China detests and has previously described as discriminatory.

The West can enjoy sovereignty, it seems – as long as it's Chinese sovereignty. ®