Mirror mirror on the wall, why will my mouse not work at all?

Fault finding fail via the friends and family helpline 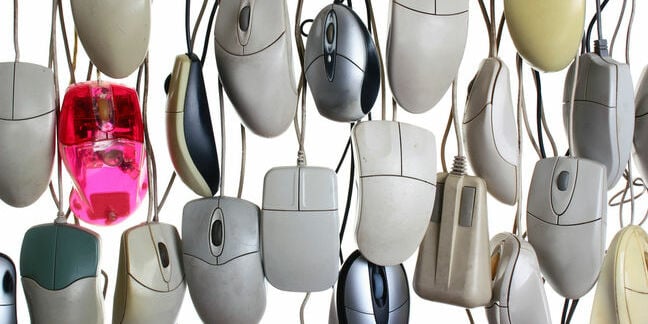 On Call For those gradually losing track of days, today is Friday. The weekend is upon us, and rather than the communal trip to the pub we might have enjoyed in months past, instead enjoy another refreshing On Call yarn from those poor devils on the frontline.

Today's tale comes from "Ian" and takes us back to when he was a mere seven years old, the first family PC had been bought, and his father was about to suffer the slings and arrows of a telephone support call.

It was a Windows 95 box with all the gear, from hefty monitor to massive printer. Since it had arrived when Ian's father was away, he, his mother and his 10-year-old sister were faced with components that needed connecting.

Rather than wait for the patriarch to return home "us kids were obviously very excited and persuaded my Mum that it should be put together," remembered Ian.

"My father," he added, "was a broadcast engineer and general fixer of things for almost his entire working life, so clearly had both the chops to piece together a home PC and the experience helping others fix tech over the phone."

And so it was that Dad was called up on the speakerphone to give instructions and offer advice while Mum did the actual assembly. Windows 95 had already been inflicted on the beast's hard disk by the manufacturer and so "once all the cables and switches were in the right places it only required turning on."

At first, all went swimmingly. Right up until Ian's mother attempted to use the mouse.

"Whichever direction she moved it, the cursor would move opposite."

Panic began to set in. The new machine was clearly faulty. No matter what his parents tried, the pointer continued to misbehave. It was impossible to connect the mouse incorrectly so the wiring within must have been at fault. It looked very much like the huge, shiny and likely hideously expensive beast was broken.

"Eventually, my Dad had to give up, or possibly go to bed in another timezone," remembered Ian, doubtless still feeling the pangs of disappointment. "During all of this my 10-year-old sister had been trying to get a word in," he remarked, "but was suitably ignored and told to be quiet whilst the adults were working."

A family friend, a Professor of Computing, was called: "More telephonic head scratching, more ignoring of my sister, nothing seemed to work."

Being seven at the time, Ian is a little foggy on all the things that were tried. We imagine the mouse was attached to different ports, balls were polished, rollers defluffed, drivers were checked, disks were scanned, but to no avail.

It was as thoughts were turning to a mournful packing-up of boxes ahead of a return to base that Ian's sister finally was allowed to say her piece.

She had noticed something that had escaped the attention of all the adults trying to solve the problem.

"The mouse was the wrong way round."

"My mother's explanation," said Ian, "was that she assumed the (wired) mouse's 'tail' should have been trailing out from the thing towards her elbow."

"She never did explain why it made sense for the buttons to be under her palm," he mused.

We all look forward to the friends-and-family support calls and the attempts to diagnose what might have befallen a piece of tech only to find a critical piece of information has been omitted. Right?

Still, better than pitching up in person, glimpsing a browser history and realising you can never ever speak to the person again.

Share your experiences on the other end of the line with an email to the team at On Call. ®