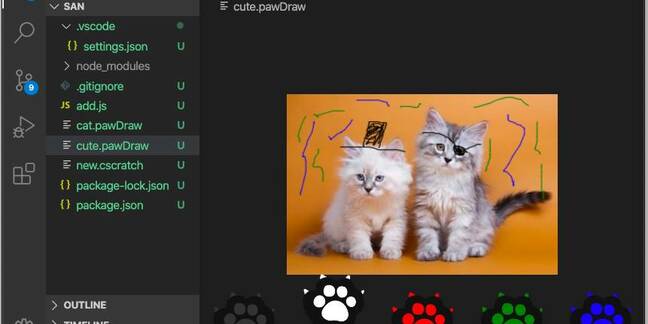 Binary file editing is in VS Code's near future

The Visual Studio Code team has released version 1.45 and is beginning to implement new features including binary custom editors for content such as images or audio files, as well as Notebook functionality, along the lines of Jupyter notebooks.

The 1.45 release is covered in a long post which describes new features big and small. Small changes include a setting that switches tabs as you scroll over them, and a new WebAssembly module that improves the performance of syntax highlighting by up to three times.

Fitting with the closer integration between VS Code and GitHub announced last week, there is now automatic GitHub authentication against GitHub repositories.

Another Git-related change is the ability to make edits from within the "quick diff editor", a handy feature when tweaking the changes made to a document. The GitHub Pull Requests and Issues extension now lets you clone repositories and publish a repository to GitHub. There is also a new Issues view where you can write custom queries for GitHub issues.

The more interesting stuff comes in the notes on what is in preview. You can try these in the Insider build of VS Code, which has also been updated. There is a new JavaScript debugger with profiling support, so you can test the performance of your script-laden web pages or Node.js application, though you have to enable this in settings.

The team is also working on native support for notebooks, though rather than just support Jupyter notebooks (for which support already exists as part of the Python tools) the intention is to "build a Notebook solution that is unbiased and supports different styles of Notebooks". An early example is the GitHub Issue Notebooks extension, which like the other preview features requires the Insider release of VS Code. The idea of this extension is that you can "run issue queries from within VS Code so that queries and results are displayed interleaved". This is the essence of the notebook concept, that results are rendered inline within the document.

VS Code is also getting the ability to support binary custom editors, via an extensions API that lets you replace the default text editor with your own. "This API gives your full control over the file is displayed to users, how edits are made to it, and lets your extension hook into save and other file operations," explain the docs. This is a powerful extension since it means VS Code could be the editor for many more file types, and use of WebView components means it should still work when running in the browser.

Cool features, but is it what developers most want? According to the list of best-supported feature requests, the top ask is for floating windows, a request first raised in mid-2016. "I use 4 monitors side-by-side. It feels insane to be stuck on just 1 monitor for code editing, especially when I'm working on several files simultaneously," said one developer. According to team member Benjamin Pasero: "I would not say that this is technically impossible but what I can say is that this feature request is both very challenging because of the UI impact and because of the fundamental change it requires to each aspect of what we have today," so do not expect this one soon.

There are also Git-related feature requests, such as an option to use VS Code as a merge editor and for conflict resolution. "Full merge support (3-way)" is on the 2020 roadmap so there are better chances of that one. Not happy? You could ask for your money back. ®

Eclipse boss claims Visual Studio Code is an open-source poseur – though he would say that, wouldn't he?

And we suppose he has a fantastic alternative too, right? One that has elements in common with VS Code?

Build Developers, get ready to hook into Windows giant's cloud

Microsoft! Please, put down the rebrandogun. No one else needs to get hurt... But it's too late for Visual Studio Online

Interview Guillermo Rauch: 'One of the biggest performance issues that we see today is to do with advertising'