What do you call megabucks Microsoft? No really, it's not a joke. El Reg needs you

It is time. We need a new Regism and cannot go to the pub to think of one. Can you help? 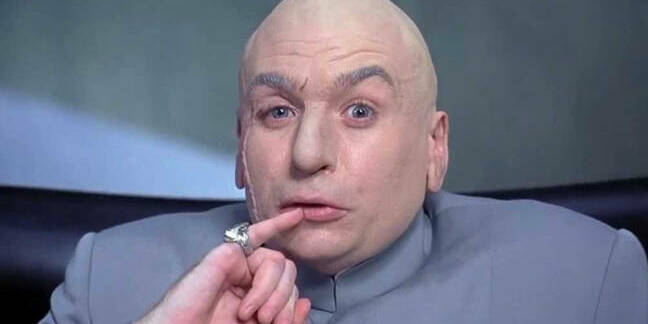 It is no secret that we like to use the odd bit of shorthand at The Register when biting the hand that feeds IT. Now we need a fresh one for Microsoft.

We know that Google has a deep and abiding love for our "Chocolate Factory" sobriquet. Everybody knows "Big Blue" = IBM and caring, sharing Larry Ellison's Oracle is known and adored by all as "Big Red".

Intel is, of course, "Chipzilla" and Cisco, we know, delights in the name "Switchzilla". Ebay is often a "tat bazaar" and good taste forbids us from revealing what Amazon boss Jeff Bezos' nickname almost was.

Apple is well known as "The Cupertino Idiot Tax Operation", although we don't know how the firm feels about it (it doesn't speak to us.) We do know that it makes the company's apologists a little sad, which can only be a good thing.

But Microsoft is tricky. "The Beast Of Redmond" is a tad old nowadays, as are Borg references. Some have suggested "Slurp" in honour of the company's creepier habits and we can see that also working in relation to the sheer amount of cash the Windows giant is syphoning from the pockets of customers.

But somehow, it lacks that certain je ne sais quoi.

Has the company turned over a new leaf since it became a friend of open source, or will the beatific mask slip to reveal the stockholder-sating beast beneath?

Since we're not allowed down the pub anymore, where such weighty editorial matters would normally be discussed, we are turning the question over to you, the knowledgeable Register readership.

There are no prizes other than the warm feeling from knowing that your suggestion might find its way into the pages of our style guide, nestled somewhere between the ancient terms fondleslab and wristjob. And what could be better than that? ®