Serial killer spotted on the night train from Newcastle

Remember when all we had to complain about were crappy rail services? 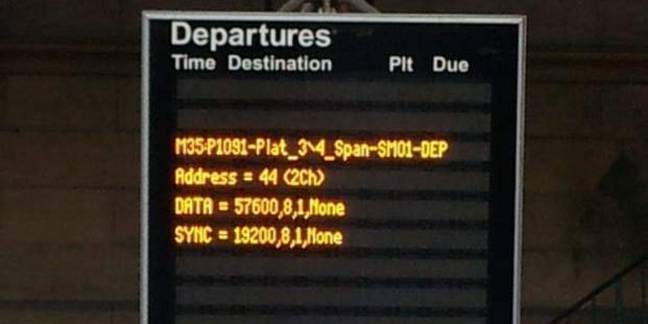 Bork!Bork!Bork! Welcome to another in The Register's inexplicably long-lived series of digital signage suffering the odd public whoopsie.

Today's entry in the Bork of Shame is a little retro and was snapped by Register reader and frequenter of the comments section "Hans Neeson-Bumpsadese" at Newcastle Central Station in the years before the majority of the country's population was instructed to stay at home.

Caught in the act of bork, the sign appears to be revealing the serial connection doing its stuff in the background (unless "DATA" and "SYNC" are stations to be stopped at in the Newcastle area).

To be fair, this hack is not too familiar with stations beyond those which Southern Rail sometimes deigns to serve. On one occasion my rail experience extended as far as a jaunt to Leeds on a swish Intercity affair before the frankly horrifying experience of a Pacer to Pontefract. As such, "M35:P1091-Plat" might be a hub for transportation when spoken in the local vernacular as much as a device identifier.

As for the sign, rather than a list of departure destinations from Newcastle and the platforms from where trains leave, the undergarments of the serial communications used behind the scenes are on full view. The speed for data is 57,600 and sync is 19,200.

It has been a while since we've fiddled with serial ports, but that looks like normal eight-bit, one-stop bit and no-parity communications to us. Thankfully, the Hayes AT modem commands that float to the top of one's memory when dealing with serial settings are not required here.

The borked display itself appears to be a LED matrix, and while tracking down a definitive manufacturer proved tricky we did enjoy a delightful tumble down a clickhole of urban street furniture thanks to the likes of Trueform.

It is unfortunate. After all, Newcastle Central Station itself is quite the hub, with northbound services heading deep into Scotland and southbound trains going back to Kings Cross. Services also go as far as Penzance as well as towards Manchester and Liverpool courtesy of the TransPennine Express.

But for passengers, the only destination appears to be to bork and beyond. ®

Talk to me: The new Windows Insider boss speaks as the gang fixes Fast Ring reliability

Roundup Also: naming the next PowerToys toy and a look at the latest Visual Studio preview

Well, when we say we, we mean... we read a paper some others wrote

'A little prayer' for bovine victim of Northumbria Police marksmen

Puts Huawei on LTE leader board