Britain has no idea how close it came to ATMs flooding the streets with free money thanks to some crap code, 1970s style 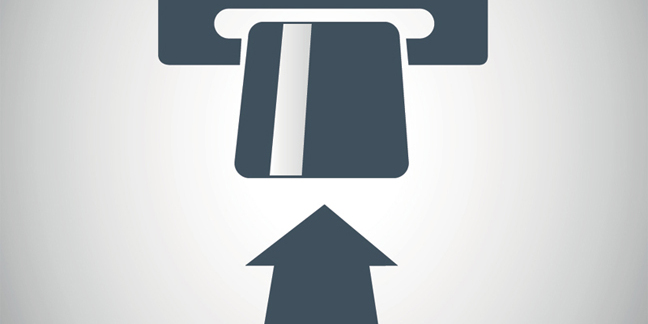 Who, Me? Welcome to the start of another working week and a tale to take us back to the orange and brown hues of the 1970s courtesy of The Register's Who, Me? thread.

Today's story flings us back 45 years. Skylab was still in orbit, Russia and the US were playing touchy-feely with their Apollo Soyuz Test Project, "Bohemian Rhapsody" was released and cash dispensers, or ATMs, were cropping up around Blighty.

Our hero of the tale, whom the Regorandomatic 9000 has elected to call "Sam", had just graduated and was working for a firm responsible for the cash dispensers of a well-known UK high street bank.

Fresh-faced and just out of college, "I was the sole programmer on the firm's oldest range of ATMs," he told us.

We can just imagine – those were the days long before bean counters had the bright idea of shoving Windows XP Embedded or Windows 7 into holes in the wall. Back then, serious iron was involved in such things. The IBM 2984 Cash Issuing Terminal, for example, turned up at Lloyds Bank in 1972 and, as well as coining the term "Cashpoint", can be seen very much as the ancestor of the ATMs of today.

Sam's ATMs were based on the Burroughs TC500, as ubiquitous back in the day as the PDP-11 would become a few years later.

"It was a strange little computer," he recalled, "having no RAM storage; the programs were executed directly off the disk which had a whopping 8KB of memory. The computer also incorporated a golf-ball typewriter for recording transactions."

Back in the 1970s, our hero was tasked with writing the Dispense routine for the elderly kit, which he described as "the exciting bit at the end of the process".

After the customer had shoved in the appropriate card and tapped in a PIN, cash was supposed to pop out of the machine. "The princely sum of £10," recalled Sam happily.

As a reminder, £10 in 1975 works out to around £85 in today's money. Back then a First Class stamp would set you back 7p and you could expect to pay around 25p for a pint of beer. So that crisp £10 was not something to be sniffed at.

Written in machine code, the software was loaded on eight-hole punched paper tape (as all proper software should be).

"All seemed to go well until field engineering came to test my masterpiece," recalled Sam. It seemed overkill – how complicated could the code be?

Clearly not complicated enough, as 30 minutes into the test a red-faced engineer spluttered: "We've got a problem with your routine! If one of the sensors fails, the ruddy machine will empty the contents of the safe onto the street!"

We'd love to report that Sam's error had made it into the production, and up and down the streets of Blighty, afflicted ATMs were spewing forth beer tokens like confetti.

"I went as white as a sheet," he said. "Being quick-thinking I could see how this might be an issue."

Sam swiftly fixed the bug and the test engineer lost his purple hue after passing the not-so-generous code. Being the 1970s, nothing more was said on the matter.

Now a web designer and semi-retired, Sam said of his 45-year-old faux-pas: "No one else was any the wiser..."

Ever made a horrible, horrible coding error but managed to discreetly brush it under a handy rug? Or caused a tester to burst a blood vessel? We've done at least one of those two things. Tell Who, Me? all about your darkest hour. ®