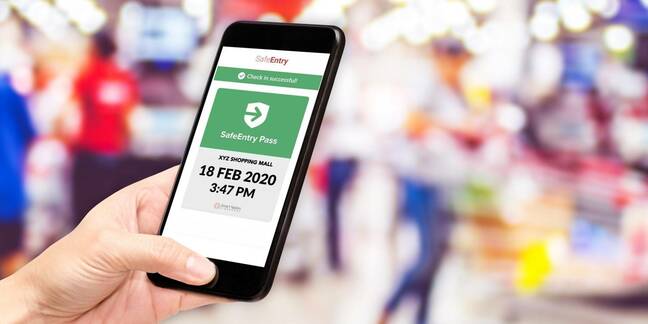 A Singapore government promo for SafeEntry

Singapore will from May 12th require all businesses to adopt a system that checks visitors into and out of their premises using their smartphones, and has already made using the system compulsory before entering some venues.

Called “SafeEntry”, the system is designed to enhance Singapore's coronavirus contact-tracing capabilities and requires visitors to either scan a QR code or allow their phones to be scanned to record a barcode in the national e-services app. That scans are taken when visitors enter and exit a premises.

Singapore’s Ministry of Health says the service logs names, national identity numbers (or the equivalent for long-term residents) and mobile phone numbers, plus the time a user entered and exited a venue.

The resulting data is uploaded to a cloud service where, the Ministry says, it will only be used “by authorised personnel for contact tracing purposes, and stringent measures are in place to safeguard the data in accordance with the Government’s data security standards.”

Singapore’s introducing the service in response as part of its effort to lift coronavirus-related restrictions on movement. After initially doing well to quell the virus’ spread, the city-state recorded a spike in cases with most found in dormitories used to house foreign workers. The increase in cases prompted a new round of restrictions, dubbed “circuit breaker” measures. Now the national government wants to ease those restrictions and set Singapore on a road to just-about-normal from June 1st. To get there it is telling citizens it needs SafeEntry to improve contact-tracing.

While SafeEntry will be compulsory in all businesses and for those entering public venues like shopping malls, even train stations and parks will be encouraged to display barcodes so that visitors can check in and out.

Singapore was one of the first nations to adopt a Bluetooth-powered contact-tracing app, fueling plenty of global debate about the best way to deploy the technology. SafeEntry will advance that debate as its introduction surely suggests that contact-tracing apps have their limitations.

SafeEntry was developed by the same government agency that created TraceTogether. The latter was open-sourced – perhaps SafeEntry will be too!

In Taiwan, meanwhile, the City of New Taipei will soon re-open sports centers and public libraries. To enter the former customers must fill out an online form that records basic personal information, travel history, and which facilities they intend to use, then use a QR code to register attendance. Library visitors will need to present their library cards and national identification card. ®

How a QR code can fool iOS 11's Camera app into opening evil.com rather than nice.co.uk

Interesting idea but we can imagine the downside

Redmond admits defeat in war that never was

They forgot 'as a Service' though. Maybe Cloud's over?