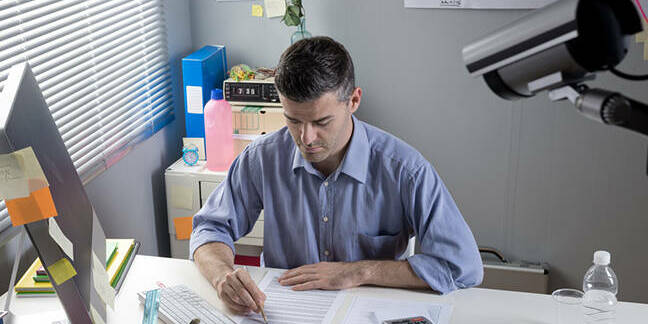 Microsoft is adding to its slightly worryingly named Productivity Score preview with additional granularity and categories.

How does your Productivity Score?

The preview, which is accepting sign-ups next month, can be enabled from June via the Microsoft 365 Admin Center by selecting Productivity Score in the Reports menu.

It's a little creepy-sounding. Its goal is to assist a company in getting the best out of Microsoft's tools by analysing how users are working with the platform. As well as keeping on eye on collaboration habits and "meeting culture", the score is also affected by technology (for example, whinging about how many users are dragged down by spinning rust versus solid state). Helpfully, the system will also provide tips on how to improve things.

Things have got a bit more granular since those halcyon Ignite days, and more insights are now available, including a Communications category, which is all about seeing how users communicate and share.

More important in these remote-working times is the Network Connectivity category, which gives insights into locations where connectivity is, frankly, a bit rubbish.

Microsoft 365 corporate veep Brad Anderson's own particular obsession – the time it takes a Microsoft-powered computer to cold boot to productivity – is also measured by Endpoint Analytics.

The Reg put it to Anderson that all this slurpage might be a little worrying, and perhaps some less than enlightened companies might use such "productivity" data to slap an employee or two with the wet fish of HR.

He insisted that "there is no PII (Personally Identifiable Information) data in there... it's a valid concern, and so we've been very careful that as we bring that telemetry back, you know, we bring back what we need, but we stay out of the PII world."

Anderson went on to explain that within the Productivity Score, data could be retrieved on an individual level although it was possible to configure exceptions, for example where a country's labour or privacy laws do not allow that level of oversight.

In today's post on the matter, Microsoft stated: "In the Employee Experience area there is now user-level granularity in all categories to help you determine who needs upskilling."

Melissa Grant, Microsoft 365 director of product marketing, added that enabling snooping was not the plan, although Microsoft had been asked if it was possible to use the tool to check, for example, that employees were all online and working at 8, as usual. "We're not in the business," she said, "of sort of monitoring employees or using that stick to say, 'Hey, you're not doing this, you're not doing that'."

SSO for all the cloud apps

As well as tinkering with Productivity Score and associated analytics, Microsoft also extended the ability to use Azure Active Directory (AD) single sign-on (SSO) for an unlimited number of cloud apps at no extra cost. ®