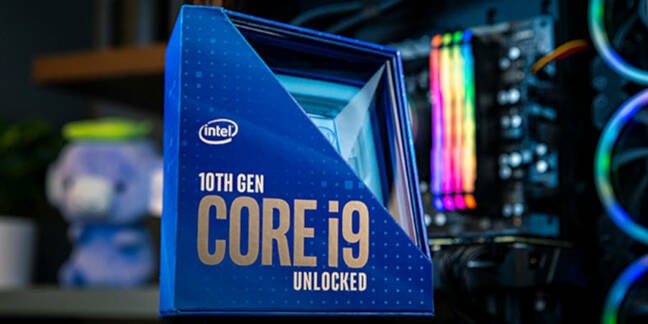 Intel this week unveiled the desktop processors in its 10th-generation Core series, the headline component being the 10-core i9-10900K that can run up to 5.3GHz.

These are refined 14nm Skylake-based parts – a microarchitecture that dates back to 2015 – rather than the 10nm microprocessors people have been waiting years for.

And then there are the mid-range i5 parts, here, and the low-end i3 ones, here.

There are 32 combinations all told in this fresh batch of desktop-grade processors, code-named Comet Lake, and too many to list here.

The chipsets support up to 2.5Gbps Ethernet, Wi-Fi 6, PCIe 3, and dual-channel DDR4-2933 RAM for the i9 and i7 and DDR4-2666 for the i5 and i3. They sport a built-in UHD Graphics 630 graphics system, unless it's an F-type and requires a separate GPU, and they require an LGA1200 socket so you may be looking at a new motherboard if you want to upgrade.

The more high-end offerings use Intel's Turbo Boost Max 3.0, which ramps up the frequency of one or more "best performing" CPU cores on the die to match demand within the physical constraints of the system, and Intel's so-called Thermal Velocity Boost, which increases the clock speed of cores as needed if the silicon can stay under 70°C (158°F).

So if you can keep your processor cool, you can get Thermal Velocity Boost speeds – 5.3GHz on the 10900K, for example – or you fall back to Turbo Boost Max 3.0 speeds on preferred cores – 5.2GHz for the 10900K – if possible, and something slower on the other cores.

You can absorb the marketing blurb and specs here. Chipzilla reckons its 10th-generation Core lineup can cater for desktop power and casual users, gamers, and Internet-of-Things and edge applications.

Meanwhile, around the same price points as the Comet Lake Cores, AMD's touting up to 12-core (24 thread) 7nm Ryzen parts clocked up to around 4.6GHz with faster RAM and PCIe 4. ®