And who could blame it? 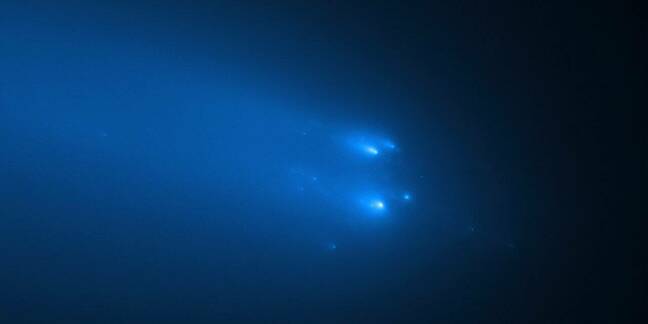 Pics Stargazers hoping to glimpse a comet close to Earth next month are in for a disappointment: it fell apart en route.

The comet C/2019 Y4, commonly referred to as ATLAS after its discovery by the Asteroid Terrestrial-impact Last Alert System in Hawaii, broke off into as many as 30 shards – each one the size of a house – judging from images snapped by NASA’s Hubble Space Telescope.

C/2019 Y4 was first spotted in December last year. Astronomers were excited that the icy rock appeared to be brightening and they expected it to be visible to the naked eye come May 23, when it would have been just 115 million kilometres (71 million miles) away. Unfortunately, the comet began dimming suddenly, and now it’s disintegrating before our eyes.

Quanzhi Ye, a visiting assistant research scientist at the University of Maryland in the US, is far from disappointed. He believes this will give scientists a rare chance to observe a comet like ATLAS disintegrate.

“This is really exciting – both because such events are super cool to watch and because they do not happen very often. Most comets that fragment are too dim to see. Events at such scale only happen once or twice a decade," he said on Tuesday.

When ATLAS began to dim, scientists had a sneaking suspicion it was fragmenting. Jose de Queiroz, an amateur astronomer, proved them right when his own photographs revealed that ATLAS had broken into three chunks on April 11.

Further observations by the Hubble Space Telescope showed the comet has been falling apart more rapidly. Two images taken on April 20 show 30 fragments, and on April 23, there are 25 pieces swept up in the comet’s tail.

“Their appearance changes substantially between the two days, so much so that it's quite difficult to connect the dots,” said David Jewitt, an astrophysics and astronomy professor at the University of California, Los Angeles, who led a team that took photos of the comet with Hubble.

“I don’t know whether this is because the individual pieces are flashing on and off as they reflect sunlight, acting like twinkling lights on a Christmas tree, or because different fragments appear on different days.”

Astronomers aren’t quite sure why comets break apart. Some believe the nucleus disintegrates as it spins, and the icy material locked in its surface vaporizes.

“Further analysis of the Hubble data might be able to show whether or not this mechanism is responsible,” said Jewitt. “Regardless, it's quite special to get a look with Hubble at this dying comet.” ®

Fomalhaut b exoplanet may have been cloud in a trench coat: Massive 'world' formed after 'mid-space super-prang'