Wakey-wakey! A quarter of IT pros only get 3-4 hours' kip – and you won't believe what's being touted as the 'solution'

Going to bed earlier? Getting more exercise? Don't be ridiculous. It's 'the adoption of cloud technologies' 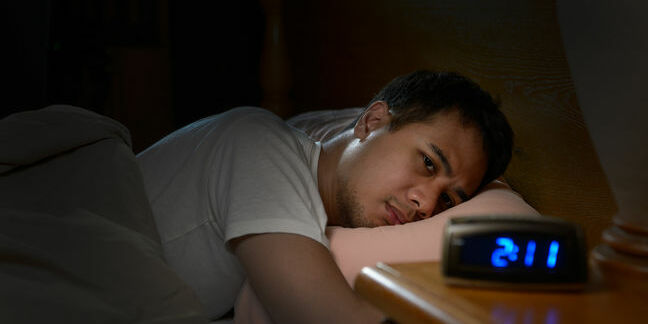 'If only I had adopted more cloud technologies...'

Feeling refreshed, revved up and raring to go? No? Well, the chances are you did not get enough sleep. Among the throngs of IT professionals, it would appear you are not alone.

According to a survey of 257 UK-based IT pros, around 74 per cent are getting less than the recommended seven-to-eight hours' shut-eye on a weeknight. Perhaps more concerning is that a quarter of the sample said they got between three and four hours' slumber on a school night.

The study by market research outfit Savanta found that on a typical working day, more than half of IT pros wake up still feeling tired, sleepy or groggy, leaving them less motivated, less productive, more error-prone and less happy. Meanwhile, more than half of respondents again admitted to taking power naps during the day.

Some of the sleep loss, respondents said, was down to general stress (49 per cent), but for 38 per cent anxiety about work stops them sleeping.

So what's the worst role in IT for mental pressure? It is the one most impacted by fear of hackers, malware and misguided users. Security was the department most likely to be stressful, cited by 54 per cent.

Of course, it's toughest at the top, right? Wrong! It turns out that 65 per cent of those at director or CIO level said they're satisfied with their work/life balance, while only 36 per cent of those in less senior roles could say the same.

Now, all this sounds very worrying, but the research, sponsored by Microsoft services company Core, does come up with some solutions. Turning off the screens and taking the dog for a walk? No. Hitting the gym to burn calories and build up some endorphins? Get out of here. Pouring a glass of wine and getting engrossed in a 1980s ZX Spectrum manual? Don't be ridiculous.

The reason given is that cloud systems provide businesses "access to a broad pool of skills and expertise, freeing-up their IT teams from day-to-day operational workloads," Core said.

Now, we don't know about you, but we'd be surprised if any business's tech stack did not, in some way, exploit cloud technology. And cloud tech must surely sometimes be the cause of techies' ire: There's nothing more frustrating than waiting for engineers in another part of the country or a corner of a continent to fix a network problem.

There's a counter-argument saying that access to business systems 24/7 does not lead to less stress. It may not have escaped your notice but working from home is something of a trend right now. Another poll, this time of 500 workers by the Institute for Employment Studies, found that half of employees working from home during the lockdown are unhappy with their work-life balance.

Perhaps Core needs to sleep on it before it presents its proposals.®

Beat the heat – sleep on the streets for Byte Night 2018

Chillout by raising some cold hard cash for vulnerable youngsters