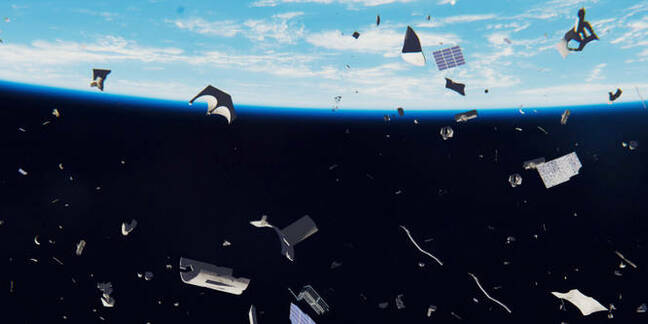 Satellite communications companies beaming signals to and from America will need to convince the nation's comms watchdog that any new sats put into orbit won't collide with others and spam space with debris.

On Thursday, the FCC announced new rules that tackle the growing threat of orbital debris polluting space around Earth. “Since 2004, when the rules were last updated, there have been significant changes in satellite technologies and market conditions, particularly in the low earth orbit region of space,” the regulator stated.

“These changes include the increasing use of lower-cost small satellites, such as CubeSats, as well as plans for the deployment of large constellations of non geostationary orbit systems, some involving thousands of satellites.” (Cough, cough, Elon Musk’s Starlink project.)

If any satellite was to smash into another, or break apart, the debris could tear into other satellites, creating more dangerous junk that causes more mayhem and destruction in orbit. If unchecked, this runaway chain reaction, dubbed the Kessler effect, could put all space exploration missions in peril as nothing would be able to make it safely through the whirling storm of shrapnel after lift-off from Earth.

As such, companies applying for permission to deploy satellites to provide things like wireless broadband connectivity to the US will have to demonstrate how they plan to minimize the risk of orbital debris. They will have to calculate the risk of collision during operations, and if the satellites are planning to re-enter Earth’s atmosphere.

Operators will also have to notify the FCC if their satellites release any liquids, and the mechanism for nudging them out of the way of other spacecraft.

“Today, for the first time in 15 years, we are adopting new rules to mitigate the threat posed by orbital debris, including regulations involving satellite design, better disposal procedures, and active collision avoidance,” watchdog boss Ajit Pai said in a statement.

“Fifteen years is an eternity in this fast-moving sector, and the time has come to address this critical issue. The rules that we adopt today take a balanced approach: mitigating the risk posed by orbital debris, while at the same time continuing to light a regulatory path for space-based innovation.”

While the FCC's commissioners voted to approve the new requirements, we note that some of the stricter proposed rules were withdrawn, and will be reconsidered and refined following further rounds of public and expert comment.

“Some of my colleagues asked that we move our consideration of certain issues from the report and order to the further notice so that we could seek additional comment on them, and I was happy to accommodate that request," Pai said.

"But let me make clear that I plan on bringing these issues to closure once we have received additional feedback. Because while our action today is an important step toward addressing the threat posed by orbital debris, there is still more that needs to be done to protect the space environment. It is in everyone’s interest to keep the final frontier safe for new and innovative uses.” ®

PS: Also on Thursday, the FCC announced it had opened up more than 1,200MHz of bandwidth in the 6GHz band for unlicensed Wi-Fi use, ideal for next-gen Wi-Fi 6E devices.