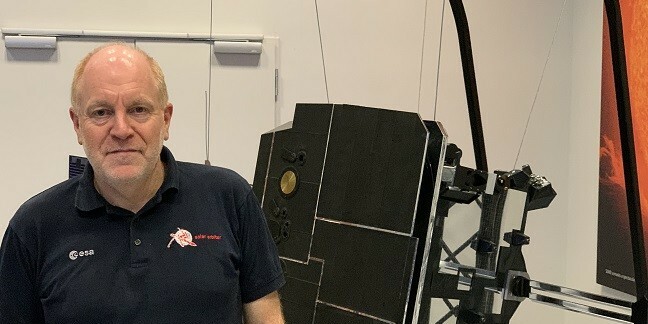 Interview SpaceX is due to fling another 60 Starlink satellites into orbit tonight. The Register spoke to ESA's Senior Advisor for Science & Exploration, Mark McCaughrean, about the night sky and interstellar specks on the windscreen.

At 19:30 UTC tonight, a Falcon 9 carrying the seventh Starlink mission is due to leave Florida's Launch Complex 39A. Approximately 15 minutes later it will deposit another 60 of the 260kg satellites into orbit.

More launches are planned, and eventually the constellation "will deliver high speed broadband internet to locations where access has been unreliable, expensive, or completely unavailable". Service is planned first in the US and Canada in 2020 and most of the populated world in 2021.

UK residents have been able to see Starlink satellites – there are more than 300 in orbit so far – passing, and sometimes flaring, in the night sky over the last few days. Which could be a bit of a problem as far as amateur and professional astronomers are concerned. Or perhaps a boon.

We spoke to McCaughrean at ESA's operation centre in Darmstadt, Germany, following the successful Solar Orbiter launch, back before Starlink rival OneWeb hit the buffers and the only hints of the impending pandemic were terse notes handed out by ESA asking that those coming from China might consider not attending.

The Starlink argument is an interesting one. "Astronomers are one extreme," he told The Register, "talking about the despoliation of our professional arena."

On the other hand, he added: "There is the other extreme, saying that this will help international development by bringing broadband."

"I would then dispute whether this is the right way of doing it, the best way of doing it, by putting a monopoly into space." And, unlike 5G, the money paid for access will not go into local infrastructure but will instead head "to a guy in California who wants to go off to Mars".

While McCaughrean has little love for Elon Musk's acolytes, with their dreams of Mars rockets and an instinctive knee-jerk response of "you're against progress" to those who question the plans of His Muskiness, he acknowledged that there was a "middle ground of people that don't care about professional astronomy".

"They're using space applications, they're using weather satellites, they're using GPS to find their way to the shop where they want to get the bargains. So, space is important to them. But they're not geeks about it.

"The thing about the Starlink debate is that it's not only about a professional arena potentially being taken away, an area where we do research. Or bringing Wi-Fi or communication signals to the world.

"I think this fundamental question in the middle is about what should the sky look like when I go to a dark place and have a look at it?

"Is my expectation that it's just going to be crawling with satellites?"

McCaughrean gave SpaceX some credit for attempting to mitigate the brightness of the first few Starlink satellites but reminded us that "there's a colossal amount of money to be made there, this is not an altruistic project to bring connectivity to remote locations at all."

The Register put these points to SpaceX, but have yet to receive a response.

And as for laws governing the use of space? "We live," he mused, "in a very dangerous geopolitical time where governments are not trusted. Experts are not trusted. Demagogues are the ones that we all have to listen to. And the space billionaires are demagoguing…

"It's a very complicated picture. And I think it's beyond professional astronomers, beyond telecoms, it's beyond even the legal profession. It's a profound question about where we want the world to go in the next 50 years. And if you like, the whole ownership of space, even if it's a question in the first place (who owns space) is a kind of a canary in the coal mine because it's there, it's visible, it's doable, but the same sorts of principles apply everywhere on the Earth, or in the deep ocean."

The next Voyager Golden Disc moment

Looking beyond Starlink and the challenges faced today, to the recent 30th anniversary of Voyager's Pale Blue Dot image, McCaughrean paid tribute to the long-lived project, laughing: "I would give an arm and a leg to be half as eloquent as [Carl] Sagan!

The Voyagers are heading into interstellar space, as will the New Horizons probe, but McCaughrean pondered what the next gold disc moment might be.

Speculating that a future visitor, billions of years from now, would likely be travelling from star to star and thus any encounter with Voyager would be as a "speck of stuff on the windscreen", his conclusion was that "you'd be much better off sticking your Sentinel, your monument as it were, in the Solar System, somewhere we were.

"These are things we did; these are the mistakes we made."

Something to ponder as one looks at the night sky. If only it were not so full of winking dots.

"Some of us," sniffed this hack's spouse, "rather like those winking dots."

There's no accounting for taste. ®