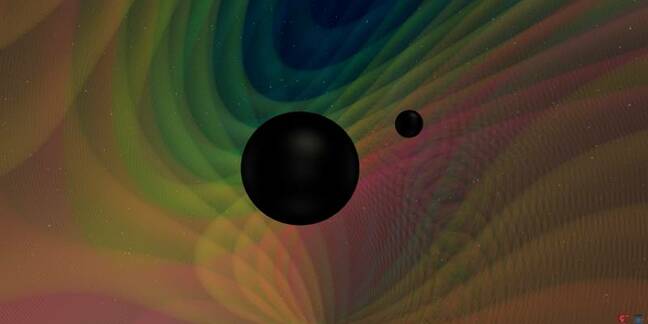 Gravitational waves from a pair of merging black holes with different masses – the heftier one being 30 solar masses and its companion being just eight – have been observed for the first time.

Boffins working at the LIGO and Virgo gravitational wave observatories, in America and Italy, together confirmed the binary black-hole merger this week – a key detail being the holes have unequal masses.

Both detectors have become so sensitive that since April last year, they've sniffed signs of a black-hole merger about once a week. In fact, the confirmation of most gravitational wave measurements has become so common that they no longer make headlines. But the latest result – codenamed GW190412 – is particularly special, according to a team at the German Max Planck Institute for Gravitational Physics.

“For the very first time we have ‘heard’ in GW190412 the unmistakable gravitational-wave hum of a higher harmonic, similar to overtones of musical instruments,” said Frank Ohme, leader of the Independent Max Planck Research Group “Binary Merger Observations and Numerical Relativity” at AEI.

“In systems with unequal masses like GW190412 – our first observation of this type – these overtones in the gravitational-wave signal are much louder than in our usual observations. This is why we couldn’t hear them before, but in GW190412, we finally can.”

The signals were emitted when the binary black hole system lost angular momentum and spiraled into one another somewhere in space 1.9bn to 2.9bn light years away from us. The loss of energy was radiated away as gravitational waves that rippled through spacetime to reach interferometer detectors on Earth.

Here's a simulation of the pair smashing into one another, with different wave forms being emitted by the cosmic collision:

“This big mass difference means that we can more precisely measure several properties of the system: its distance to us, the angle we look at it, and how fast the heavy black hole spins around its axis,” said Roberto Cotesta, a PhD student at the AEI.

It’s the first time that scientists have been able to estimate the system's precession.

“Thanks to the improved sensitivity, GW190412 has begun to reveal us a more diverse, submerged population, characterized by mass asymmetry as large as four and black holes spinning at about 40 per cent the possible maximum value allowed by general relativity,” said Alessandra Buonanno, director of the Astrophysical and Cosmological Relativity division at the AEI.

GW190412 is the second confirmed gravitational wave signal from an observation run that ended on March 27 this year. The first measurement from this batch – GW190425 – was published in January and showed a collision that took place between two neutron stars. Scientists are now working their way through a backlog of 54 potential merger candidates. ®