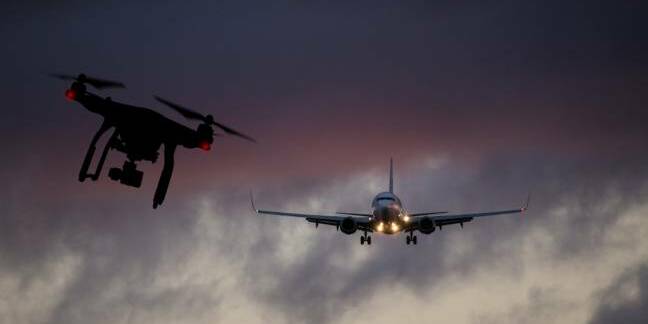 Although stories were doing the rounds last week that rules on drones had been relaxed for police drone fliers, in reality the rules for police were changed in March, and this month's rule adjustment merely tightens them up again.

Official Record Series 4 bulletin number 1361, the snappily titled CAA regulation in question, was issued on 27 March allowing emergency services drone operators to fly their craft up to 600ft above ground level and within 10 metres of people and vehicles "not under the control of the remote pilot".

Members of the public flying drones must stay below 400ft and 50 metres away from people and vehicles that aren't part of the drone-flying party.

The March regulation was withdrawn and replaced with ORS4 No. 1375 on 8 April, which sparked a number of news articles late last week.

The only difference, the CAA confirmed to El Reg, was the lowering of the maximum height for police drones from 600ft to 500ft. A spokesman told us: "As the traditional aviation COVID support flights built up [the drone height limit] was lowered to 500ft to take those into account and deconflict from where they might now be operating."

He added: "Regardless of the height, the drone operator has a duty to see and avoid other traffic anyway and the operator or a linked team member must always have the drone in sight to enable that."

One experienced civilian pilot and private drone operator told The Register: "I have genuine concerns about a 10m separation, we have to keep 50m legally. I'd do 10m from myself and friends if flying recreationally but to do that for a member of the public is crazy."

Like police helicopter and fixed-wing aeroplane units, police drone units are licensed differently from civilian aviators. While police helicopter units tend to attract ex-military pilots with the skills to fly in challenging bits of the sky (at low level over city tower blocks or in bad weather over hills and mountains, for example), it may be too early to tell whether military drone operators come from the same sorts of backgrounds.

Both police and local councils began deploying drones when the UK's lockdown measures were first declared, though ORS4 No.1375 explicitly applies only to emergency services workers directly supporting a police force. ®

US military gets authority to shoot down citizens' small drones

Meanwhile, DJI says it had no idea army was using its kit