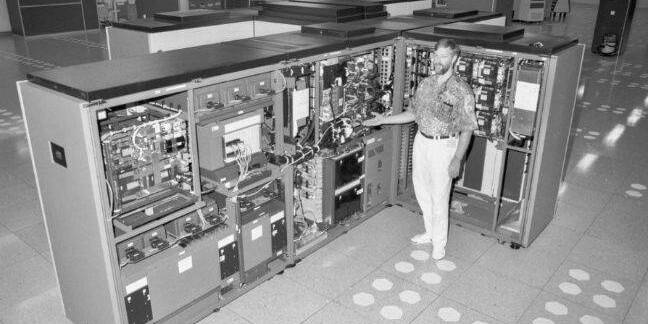 Werner Pfäffli of Swisscom, alongside the company’s original mainframe system – the same man who switched off Swisscom’s mainframe in 2019

COBOL, 60 years old this month if you start at the publication of the US Defense Department's April 1960 software specification, is short for COmmon Business Oriented Language.

The software was designed to be machine-independent and easy to use, so that government organizations and businesses could run data processing jobs on diverse hardware. It was also disparaged by some computer scientists for its lack of academic pedigree.

Despite its age, COBOL is still in use and COBOL programmers are still in demand, particularly given the impact of the COVID-19 pandemic on government agencies with legacy IT systems.

Connecticut Labor Commissioner Kurt Westby on Wednesday recounted the "hundreds of hours of programming" that have gone into modifying his state's unemployment claims system, which runs on 40-year-old hardware, to handle the surge in COVID-19 claims. And earlier this month New Jersey Gov. Phil Murphy put out a call for COBOL programmers to prop up that state's aging mainframes.

And a Missouri-based IT biz FairCom on Thursday said it is offering COBOL modernization services for non-mainframe COBOL systems for free for a year to government agencies, because of the burden COVID-19 has placed on those systems.

A source of amusement...

"COBOL is often a source of amusement for programmers because it is seen as old, verbose, clunky, and difficult to maintain," wrote John Graham-Cumming, CTO of Cloudflare, in a blog post.

"And it's often the case that people making the jokes have never actually written any COBOL. We plan to give them a chance: COBOL can now be used to write code for Cloudflare's serverless platform Workers."

COBOL is a compiled language, so it can be converted to WebAssembly, which allows the instructions to run on Cloudflare Workers.

Typically written in JavaScript/TypeScript, C/C++, or Rust and executed on the Chromium V8 engine, Cloudflare Workers implement the Service Worker API to handle HTTP traffic at the edge of the Cloudflare network. One reason to do so is that proximity to users can improve response times.

Using the GNUCobol project, you can compile COBOL code to C and then use Emscripten to compile the C code to WebAssembly. Cloudflare offers a tool called cobaul to simplify this process.

Deploying a COBOL Worker involves installing wrangler, a tool for setting up Cloudflare Workers, on a local machine.

You then run the command:

That creates a directory named cobol-worker with the Worker code. Cloudflare account configuration instructions get printed to the terminal.

After that, the worker can be deployed with the command npm run deploy.

To get a sense of the possibilities of COBOL, Cloudflare has a Paper, Scissors, Rock demo. ®

ITAM Forum opens: 'People just want to talk to other managers about how to defend against software audits'