Flying a 50-year-old rocket to mark the anniversary of Apollo 13? What could go wrong? 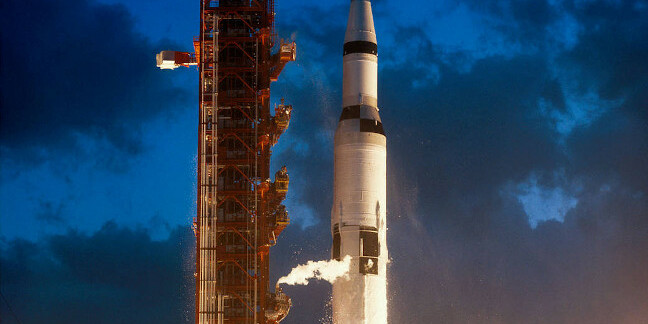 April Fools Faced with spiralling costs for its Space Launch System (SLS) and pressure to put American boots on the Moon by 2024, NASA is to return the Saturn V to flight.

"Achieving the President's goal is our number one priority," said an anonymous agency insider, "and with the continuing delays in the SLS program, we've decided that the only way to meet, or even beat that goal is by looking to our heritage."

The abrupt cancellation of the Apollo program meant that there were several major components left over, including Saturn V rocket stages and Lunar Modules, some of which were in relatively flight-ready state at the time. Certainly when compared to the SLS.

"The plan," the insider told us, "is to take the Saturn V at Kennedy [Space Center] and launch that from the launch platform we've had sitting around for SLS.

"The engineers have already performed the adaptations necessary, and we're confident that we could launch in the coming weeks rather than the years needed for SLS."

NASA famously never throws anything away (apart from the Shuttle program), and The Register understands that Apollo era platforms have been reinstalled in the cavernous Vehicle Assembly Building at the Kennedy Space Center for the purpose of stacking the Saturn V vertically ahead of its historic roll out to the launch pad 39 complex nearly 50 years since the rocket last flew.

The Lunar Module planned for Apollo 15, LM 9, is to be retrieved from display at the space center. We understand that while it has not been possible to restore the original module simulators to prepare astronauts for future use of the capsule, modern virtual reality technology has proven useful.

Modern technology has also been fitted to both the Saturn and the module in the form of relatively recent Arm-powered equipment. Our source remarked: "People were always saying that there was more power in a phone than the Apollo era computers, so we shoved a bunch of iPhone 8s into the spacecraft for redundancy. It saved enough weight for us to load some Trump Golfing merchandise onto the spacecraft in lieu of actual science."

When asked why an 8, the source responded: "NASA isn't made of money," and rolled their eyes when we suggested an Android device might be a more economical alternative.

As for mission training and trajectory planning, our source told us: "We discovered something called the 'Kerbal Space Program' – the team installed it three weeks ago and we assume they've been in simulations ever since. Someone sent out for pizza and soda the other day."

A press conference is expected later today when the crew will be announced for the impending mission. Our source told us that there was every chance that NASA might re-fly astronaut Jim Lovell to mark the anniversary of the Apollo 13 mission and quash rumours that '13 and the rest of the program was actually a hoax. ®