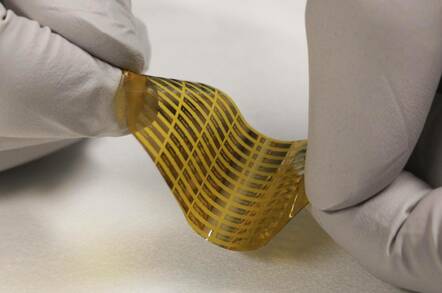 Video Scientists have crafted a tiny flexible electrical device capable of generating terahertz waves, which could pave the way for new imaging techniques and high-speed communications.

Terahertz non-ionizing radiation lies in the electromagnetic spectrum where microwaves and infrared meet. These so-called T-waves, ranging from 0.3 to 3THz according to the ITU, have interesting properties: they can travel through clothing, wood, walls, and even human skin, for one thing.

However, they can be tricky to produce, depending on the application, as you often need expensive and clunky equipment. Now, a team of boffins, led by the École polytechnique fédérale de Lausanne (EPFL) in Switzerland, believe they’ve created something that not only emits high-power terahertz radiation but is both compact and cheap. Which is useful for miniaturization and, for want of a better word, productization.

It is hoped the terahertz transmitter can one day be used to see through stuff, manipulate cells to accept drugs, send data at high speed, and so on – if it makes it out of the lab and into a commercial product, which is not a given. Right now, it's interesting science.

Below is a video describing the technology:

The nanoscale gizmo was detailed in a paper published in Nature this week, and it works by producing so-called nanoplasma. Two tiny metal plates are placed 20 nanometres apart and a voltage is applied. Electrons migrate toward one of the plates to create a nanoplasma. When enough negative charge has accumulated and the voltage across the plates reaches a critical threshold, the electrons instantly flock to the other plate.

“The very high electric field in the small volume of the nanoplasma leads to ultrafast electron transfer, resulting in extremely short time responses,” the paper explained. This back and forth motion of the electrons continues, emitting a pulse of terahertz waves.

“We achieved an ultrafast switching speed, higher than 10 volts per picosecond (10-12 s), which is about two orders of magnitude larger than that of field-effect transistors and more than ten times faster than that of conventional electronic switches,” the academics said.

The tiny nanoplasma devices were fabricated on bits of Kapton tape pasted onto a sapphire substrate, where a thin layer of gold or tungsten was stacked on top of titanium.

“High-frequency semiconductor devices are nanoscale in size,” said Elison Matioli, co-author of the study and an electrical engineering professor at EPFL.

“They can only cope with a few volts before breaking out. High-power devices, meanwhile, are too big and slow to generate terahertz waves. Our solution was to revisit the old field of plasma with state-of-the-art nanoscale fabrication techniques to propose a new device to get around those constraints.”