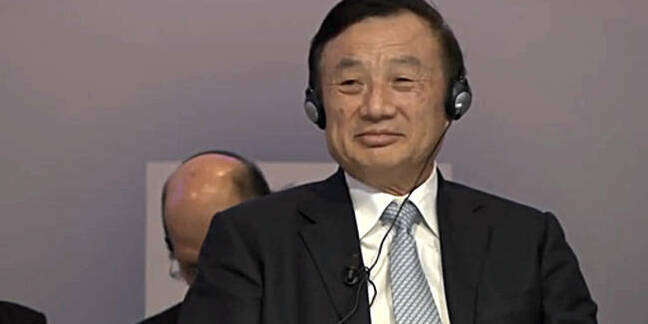 The vast majority of Huawei's employees are back to work following nationwide shutdowns implemented in response to the coronavirus outbreak in China.

Huawei's founder and CEO, Ren Zhengfei has told the Hong-Kong-based South China Morning Post that more than 90 per cent of the company's 150,000 Chinese workers are back at their desks.

The Reg asked Huawei if it had an official position to accompany the interview. We were told none was available, but that Ren's word can be considered gospel.

On we go then: in his interview Ren said that Huawei resumed some of its operations from February 3, in line with the Chinese governments decision to allow some critical industries to restart early. The company has also kept its supply chain intact by providing partners with protective gear to keep production going.

Ren said that no Huawei workers outside the Chinese province of Hubei has come down with COVID-19. He added that those who had been infected in Hubei were now recovering, but declined to give numbers.

Despite the virus outbreak, which has affected China and Europe, Huawei's two biggest markets, Ren is optimistic about the future. He expects demand for its network gear to remain strong as companies shift to remote working.

"New technologies such as tele-health, online learning and remote working have showed to the world their usefulness in preventing disease from spreading, as well as the importance of network connections," Ren told the Post.

"Even when the West is feeling the mounting impact of the coronavirus, most our projects can actually enhance their capabilities [during the outbreak]. There is a demand we need to meet," he added.

Despite Ren's positive outlook, he conceded that the company would lower its financial targets for the year in its financial results due later this month. But Ren is confident that Huawei will meet its new financial goals for the year. The company has previously said in a New Year's message to employees that revenues rose last year by about 18 per cent, to $122bn. ®