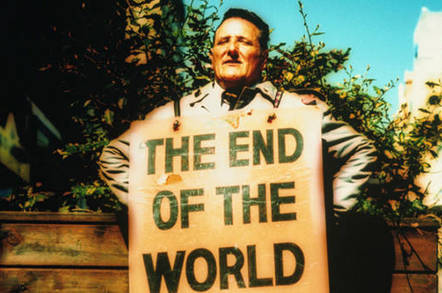 Roundup Welcome to another round-up of bandwagon-hopping and genuine altruism from big tech as the industry continues its response to the COVID-19 pandemic.

Before taking a dip into the usual snark-infested waters of our beloved industry, it is worth noting the arrival of a COVID-19 Symptom Tracker created by King's College boffins along with doctors and scientists at London's Guys and St Thomas' hospitals.

While the app (on Android and iOS) doesn't have any clinical features (we'd recommend a jaunt to the NHS website for medical advice rather than some random on Facebook) it does collect a bunch of data that, if enough people take part, will help researchers better understand who is at greatest risk from the virus, how fast it is spreading, and where the iffiest bits of the country are.

Naturally, that involves handing over quite a bit of confidential data and, although anonymised, the information could be shared with US institutions, such as Harvard or Stanford. The US has different rules on data protection and, as the gang behind the survey admit "they may not protect your data in the same way as, or as well as, under GDPR."

Still, the effort is laudable and this hack has signed up to let the team know on a daily basis how things are going. It seems a better use of time than sitting through another repeat of Homes Under The Hammer.

The app is already available in the UK and due to hit the US today.

Are your neighbours under the weather? IBM has an app for that

IBM has also got into the COVID-19 application game with an update to The Weather Channel app to allow worried Americans to track reported cases of the virus near them. The data is also available through weather.com and an online dashboard and is slurped "from various official sources."

We fervently hope one of those sources is not the social media orifice of the country's Presidential Tweeter in Chief.

IBM owns The Weather Company, which found itself in hot water recently over location slurpage through its app and the subsequent potential flogging of that treasure trove of geolocation information.

Sadly, the data is US-only at present, but goes down to the county level (where available). IBM's Watson, running on IBM's cloud, crunches the data from sources such as the World Health Organisation, and the results can be viewed in a variety of media, including a location map or trends.

The team hopes to add "additional global data" shortly. After all, COVID-19 itself is quite definitely not a US-only thing.

Have lunch on Microsoft

Microsoft continued upping the stakes on who was doing what by leveraging its supply chain smarts to get physical things to those in need as well as flinging freebies at cloud users suddenly stuck at home.

President Brad Smith trumpeted the securing of 240,000 surgical masks and 35,000 hand sanitisers for its home state. The company also provided 30,000 packed lunches for families in its area.

The previous week it provided 24,000 lunches.

The figure is impressive, although it is worth bearing in mind that similar numbers crop up when considering the feeding of delegates to all the now-cancelled tech conferences. It is, however, heartening to see the machinery that might normally sate swag-happy attendees being used to address more pressing needs.

"We understand the urgency to secure more," said Smith, "and we will."

Chipmaker, Intel, announced on Monday that it will source and donate a cool million items of protective gear for healthcare workers. Admittedly, Chipzilla has quite a lot of the things already in stock for its workers but Todd Brady, director of Global Public Affairs, said that the company would "continue to look for additional sources of personal protective equipment that we can source and donate as quickly as possible."

The chipmaker has been struggling of late, and seen its market-share eroded by the likes of AMD. It has, however, still continued to make money hand over fist, reporting an "all-time record of $72.0bn" for FY2019.

In the same month as it announced those bonzer revenues, the kind old tech giant was still able to find $1m to donate to the International Red Cross to support global relief efforts for the coronavirus outbreak.

The Pandemic Drone (no, not the sound of every news outlet the moment)

Finally, news reaches Vulture Central of work being undertaken by the University of South Australia along with a Canadian tech company to develop a pandemic drone able to detect symptoms of infectious respiratory conditions in crowds.

The drone will be fitted with a sensor and vision suite able to monitor temperature, heart and respiratory rates. It will also spot sneezing and coughing.

The gang behind the device foresee it whizzing around places such as airports, cruise ships and care homes.

The aspiration of the team is to have something operational in the next six months, although work on temperature measurements and spotting what constitutes a cough or a sneeze is still underway in the Adelaide lab.

The team from Oz is led by Professor Javaan Chahl, who has form when it comes to image processing tech that can pluck heartbeats out of drone video footage. The technology works in drones at a distance of 5 to 10 metres, and fixed cameras up to 50 metres away can also be used.

Originally designed to keep an eye on the elderly and help out in war zones or natural disasters, the technology is being adapted for pandemic purposes.

While the idea of such surveillance might be an anathema to some, we can think of a few additional handy functions: A drone that can spot if someone hasn't washed their hands and unleash a klaxon when an offender emerges from the bathroom; or maybe one that can pinpoint the perpetrator of a toxic airborne event in a crowded room. Once crowds are allowed again, of course. ®