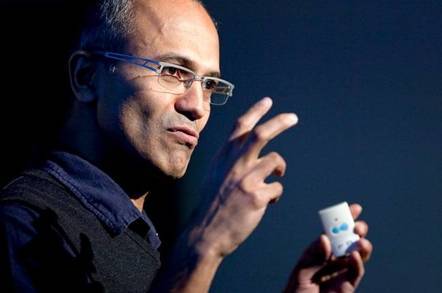 Speaking to CNBC, Nadella spent a large portion of his time talking sense and lightly dancing around the emissions of the US's very own orange-tinged tweeter-in-chief hauled up in a certain white house on Pennsylvania Avenue.

It was, however, his pronouncements over the state of the company's infrastructure that will have got the attention of administrators dealing with the demands of a suddenly remote workforce.

He went on to describe the scale of demand as "unprecedented" when asked how things were holding up before pointing to the "silver lining" that the current cloud architecture had the elasticity built into it to scale up.

He insisted that "we are definitely holding up."

Users of the company's Slack-for-Suits platform, Teams, might disagree. Last week Teams wobbled and fell over even as Microsoft tinkered with the resolution of video, how often it checked for presence and if somebody was typing.

Anyone who has enjoyed the nervous wait while a boss "types" for an age only for the word "OK" to appear probably won't miss the latter too much.

As well as Teams, which crested 44 million users as of last week, Microsoft also warned that it might have to prioritise its cloud for government users even as UK punters found themselves seemingly running into Azure capacity constraints.

Even as Nadella was speaking, the company was keeping the hamster wheel turning with more "temporary restrictions" in the form of MC207439, an announcement issued to Microsoft 365 administrators.

As well as the tinkering with Teams last week, the company will be making OneNote in Teams read-only for commercial tenants and directed those affected to the web for editing. It also limited the download size of attachments limited to 100MB.

To be fair, if you're regularly flinging 100MB attachments around, then another solution might be a better bet anyway.

Some Sharepoint operations, such as migration, will also be rescheduled to regional evening and weekend hours and video playback will receive reduced resolution. Finally, the people timeline for Stream has been disabled for newly uploaded video and again, resolution for meeting recording dropped to 720p.

Such is the price of keeping the lights on as demand surges and that "elasticity" threatens to twang back in users' faces.

There was happier news for the fans eagerly awaiting the late 2020 debuts of new Xboxen, as well as the dual screen Neo and Duo devices.

"The supply chains are all coming back," said Nadella, before cautioning: "right now, that is not our real issue."

"The bigger issue is what happens in the United States and Europe... around the demand side of this."

Indeed. There is little point in shipping pallets of exciting new gizmos if there is nobody left to slap down a credit card. According to the WHO yesterday, 85 per cent of new COVID-19 infections were seen in the US and Europe. ®