Magic potion finally runs out for famed artist and author 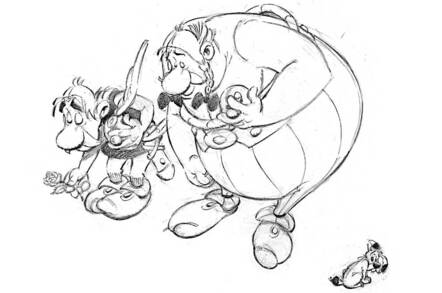 Asterix and Obelix ... Drawn by Albert Uderzo in 2015 in tribute to the victims of the Charlie Hebdo massacre

Asterix comics co-creator Albert Uderzo has died of a heart attack. He was 92.

Uderzo and writer Renee Goscinny created Asterix in 1959, with the character first appearing in a children's magazine. Two years later the first standalone Asterix album – Asterix the Gaul – appeared. The pair went on to produce another 25 volumes together, most of them bestsellers that comfortably shifted a million copies.

Asterix remained a cultural touchstone on his watch.

Your correspondent happened to be in France on holiday on the day 1996's Uderzo-created Asterix and Obelix All at Sea appeared. Even in the mid-sized Provençal town I visited that day, pallet-loads of the new book could be found outside tabacs – French tobacco-newsagent-convenience stores – and bookstores. I saw locals buy a copy and quickly occupy a park bench to read the latest installment in Asterix's adventures.

For the uninitiated – both of you – Asterix books were set during Julius Caesar's Gallic Wars. A typical Asterix story started with the titular character at home in the bucolic village in which he lived with a bunch of oddball Gauls. The village was the only part of Gaul to mount a successful resistance to Roman occupation, thanks the local druid's magic potion that imparted temporary invulnerability and super-strength. Despite endless Roman plotting, and considerable idiocy on the part of Asterix's sidekick Obelix, Asterix was always able to quaff some potion just in time to save the day. The Gauls would end up feasting and laughing while Julius Caesar seethed.

The books worked on multiple levels. Plots rattled along with splendidly villainous and absurd enemies who made it impossible not to support team Asterix. The books would often turn into the comics equivalent of road movies as characters toured the ancient world, offering a chance for a sweet buddy comedy dynamic between the shrewd warrior Asterix and his too-carefree pal Obelix. Historical figures and incidents were gently retold with an emphasis on humor.

Uderzo's cartooning was bright and wonderfully satirical. He conveyed plenty of emotion and brilliantly supported plots – Asterix could go from tightly drawn and confident to shaggy and fatigued over the course of a book, before snapping back to crisper lines once the magic potion hit his veins.

Another feature of the books was a cast with wonderful names that worked as puns across language barriers. Asterix is an obvious pun on "Asterisk". Obelix was a giant of a man and therefore a pun on "Obelisk". Thanks to brilliant translators like the late Anthea Bell, characters such as a dog named "Idéfix" – perhaps a tough concept to grasp outside France – became the more accessible but still biting "Dogmatix".

Asterix is comfortably France's premier popular literary cultural export. It's been filmed 14 times, translated into over 100 languages, turned into at least 40 video games and is the subject of a French theme park. Various sources suggest the books have sold more than 370 million copies.

More sales will flow in future. Uderzo anointed the current Asterix creative team of writer Jean-Yves Ferri and artist Didier Conrad to continue the series. And American publisher Papercutz has commissioned new translations of the Asterix back catalog designed to appeal to local readers. The first volume is due in May 2020.

At the time of writing, Asterix.com offers nothing but Uderzo's illustration of Asterix and Obelix in mourning, drawn after the 2015 Charlie Hebdo attacks, and the following tribute:

It is with great sadness that we learned of the death of Albert Uderzo, the co-creator of Asterix with René Goscinny.

For more than 60 years, Asterix has aroused in millions of readers around the world, page after page, and with each re-reading, a pleasure and a deep joy.

Already a veritable myth, the little Gaul is today part of the universal literary and artistic heritage, and will continue for a long time to carry its values of tolerance and resistance in its adventures.

Beyond the immense artist that he was, we lose an exceptional man, whom all those who had the chance to meet him cherished.

We send our sincere condolences to the family and loved ones of Albert Uderzo.

As does the team at The Register and, we hope, our readers too. Because Uderzo, Goscinny and Asterix illuminated either our own childhoods, or those of kids all of us will know. ®

Something for the Weekend, Sir? No way you're never gonna shake me... Ooh darlin' cause you'll always be my baby

Wallace and Gromit get the Google doodle treatment

Gerard Depardieu takes piss on plane, gets tossed off

You say 'block all connections', I say 'my port's still open'

Brain surgery? Would sir care for a CHOC-ICE with that?

Something for the Weekend, Sir? Education is nothing to be scared of, as Adam Ant (almost) said