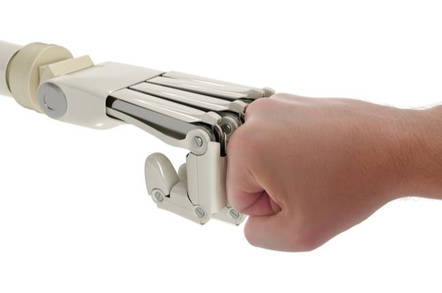 It has been the subject of hype and overblown expectations, but that is not set to dampen investment in robotic process automation – the idea that simple software “robot” can carry out annoying admin tasks. But as organisations begin to understand how best to exploit RPA, IT departments will be finding a new role.

IT analyst firm TechMarketView is standing by its prediction that market for robotic process automation is set to reach nearly £1.2bn by 2023, with annual growth reaching 35 per cent, despite the serious economic impact of the Covid-19 pandemic.

“The potential of an economic downturn in the near future could have a counter-cyclical impact on automation, driving focus on efficiency gains and cost-saving initiatives,” says the report.

Its author, TechMarketView research director Marc Hardwick, told The Register that long-term investment would be undaunted by the virus outbreak.

But the way companies adopt the technology is changing.

“The current RPA market is maturing away from delivering pockets of tactical value within a specific team or use case, towards a scenario where at least RPA is being discussed (if not always used) as a strategic asset and something that should underpin genuine digital transformation,” the report, out this week, stated.

Some RPA strategies had been distracted by “sexier” aspects of automation technologies like AI-driven RPA platforms and human-robot blended workforces, without a focus on how they might "add value", TMV's report, Future Growth in RPA, said.

“RPA has suffered from significant overhype and consistent overselling within the market on what RPA solutions can currently deliver and how easy it is to scale out and maintain a large number of bots,” it added.

And while control of data and technology is important, there are strong arguments for “democratising” RPA and putting tools in the hands of business teams.

“RPA has also increasingly moved away from being the preserve of the IT department into the wider business, and more importantly has put automation on the agenda of most Boards. Further maturity is seeing RPA progressing from the datacentre and the back office, into the front office and customer-facing environment,” the report continued.

An example comes from a case study looking into how insurer Zurich has deployed RPA, including efforts to automate electronic payments for customers claims, a process that had involved people popping cheques in the post.

Alastair Robertson, head of continuous improvement and automation at Zurich UK, said that capability internally rather than relying on consultants had helped. “The fact that much of the IT function has been with Zurich for a long time and not outsourced or offshored has meant that there is a core group that understands the UK business extremely well.”

Letting business teams get involved with building their own bots was a great way to propel a programme, he said. “A key initiative to build awareness and help drive adoption with front line staff has been a programme called ’bot in a day’. Here the automation team goes into an untapped business area and 'takes on' one of its business issues at hand. The collaboration between the business and the automation team is then celebrated to help spark enthusiasm and drive further collaboration.”

But there was little point in automating “bad processes,” said Robertson. He developed “continuous improvement and automation teams” to help develop both the technology and the process improvement. “The ability to adjust, adapt and ‘tweak’, once a process has been automated is critical,” he told TechMarketView.

However, in an interview with The Register, Jens Krueger, CTO at Workday, a cloud-based HR and finance software outfit, warned RPA should not become an excuse to dodge integration challenges.

“RPA is being used in order to overcome a lack of integration. If you have a well-integrated system, then you shouldn't need it,” he said.

RPA might be helpful when pulling file data out of legacy systems, where Restful API were not in play, and creating a better user experience. But exploiting automation built into new software was a better option, he said.

“Come on! Just look into replacing the whole system and building better processes,” he said.

Companies have always grappled with legacy environments and probably always will. RPA is a useful half-way house to an upgrade, but one you might find yourself living in for a long time to come. ®