Captain Caveman rides to the rescue, solves a prickly PowerPoint problem with a magical solution

But did our hero break 'Circle rules? 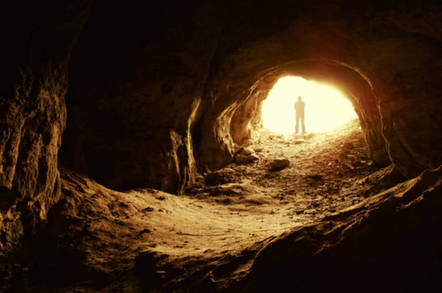 On Call Well, that was quite the week wasn't it? Perhaps Friday should start (rather than end) with a stiff drink. The Register's On Call feature is on hand to kick things off.

Today's story takes us back nearly 30 years, to the early 1990s and the unalloyed delight that was the Windows 3 era and its interpretation of multitasking.

Our reader, whom we will call "Captain Caveman" for reasons that will be become clear, was working in Wales in the happy days before companies issued mobile phones to junior IT staff and when laptops were a luxury item, handed out only to the biggest of cheeses.

While the Captain was well used to Windows and its occasional wonkery, the company he had joined was not. In fact, green or orange screen terminals were still the order of the day. "Most computer users," he added, "were unused to multi-tasking environments."

Windows 3.0 was the first iteration of Microsoft's whizzo windowing platform to feature more than a simple task switcher for multi-tasking, assuming one was running in one of more exciting modes requiring an 80286 or a mighty 80386 CPU and a little extra RAM. Windows 3.0 on an 8086 or 8088 was at best a bit of a curiosity. Thankfully, 1992's Windows 3.1 dropped support for the venerable Real Mode and was a tad less prone to fall over into a heap when provoked.

The Call came in while The Captain was at home - mobile phones were not welded to every hand back then: "I got a call on our house phone from a senior manager who was very stressed," he explained. "He had been working on a presentation he had to give at 9am the next morning and had come back to the laptop (luggable) after some time doing something else and was no longer able to access the file he had been working on."

The Captain remembered that the manager had been issued with one of HP's finest. Or maybe IBM's. Certainly, the beast was not to be messed with, but somehow the presentation had been lost. Could the Captain, a pal from when the pair had gone caving together, help?

After apologising for calling him at home (ah, the days when management didn't expect to be able to get hold of staff at all hours of the day or night) "he said he had 'tried everything' and the computer kept stating that the file was in-use and therefore he had lost all of his work."

There was no time to rewrite the whole thing before morning, and the PowerPoint of that era was quite a different beast to today's. Being a thoroughly decent chap, the Captain agreed to make the 15-minute car journey to perform a house call and have a crack at getting the file back.

"Arriving, I was greeted by the sight of someone close to panic."

The Captain was shown into the Laptop Room and sent the manager off to prepare a restorative cup of tea. "I thought he needed one and anyway, making it would distract him whilst I took a look at the computer."

"When he returned to the room, I was able to say with confidence: 'Sorted it.'"

He should have kept quiet to preserve the secrets of IT wizardry, but instead explained the magic: "Being unused to a multi-tasking system, he had managed to open PowerPoint more than once, and the file he wanted was still open in another instance of the program (hence the 'file is locked' message).

"With a simple Alt-Tab, I had 'recovered' the file... In fact, I saved a couple of copies to be sure and then left him to it."

The Captain's magic keypress was richly rewarded the following day "with a very nice bottle of red wine which my wife and I thoroughly enjoyed."

Ever solved a seemingly intractable problem with what, to a panicked user, was something akin to magic? Or had a reward that was way out of proportion to what you actually did? Tell all to On Call. ®