Though hopefully the rush for kit will have subsided by then 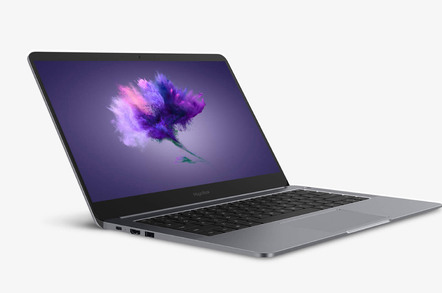 The people of Great Britain will soon be able to get their hands on Huawei sub-brand Honor's latest ultrabook – the Magicbook 14.

First released in China in November, the MagicBook is Honor's latest foray into the laptop sphere. The firm announced it would bring it to Europe in February, at a press-conference that otherwise would have coincided with the now-cancelled mega consumer show Mobile World Congress, but instead took place in a much quieter Barcelona.

The machine bears an uncanny resemblance to the 13-inch MacBook Pro, with a similar deep groove at the bottom of the chassis, and a relatively unblemished metal frame. The 14-inch display is a 1080p IPS affair, with a 16:9 aspect ratio.

Under the hood is AMD's Ryzen 5 3500U processor with Vega 8 graphics and 8GB of DDR4 RAM. Honor hasn't cheaped out on storage, using fast NVMe storage rather than the increasingly dated SATA standard.

The MagicBook 14 borrows the pop-up webcam mechanism found on the Huawei Matebook X Pro – which is a bit of a mixed bag. Although it allows smaller bezels (and therefore a more svelte package), you end up with a camera pointed upwards towards your chin. The reverse-MySpace angles, if you will. Still, many may regard this as a reasonable price to pay for an 84 per cent screen-to-body ratio.

Honor reckons you'll be able to get about 10 hours of continuous usage with the MagicBook 14, which is respectable, if not outstanding. It does win points for the inclusion of 64W USB-C fast charging, however, which can give a 46 per cent charge in just 30 minutes.

Available on April 7, the Honor Magicbook will retail at £549.99 at Argos and Amazon - presuming you can manage to order one before it goes the way of the other laptops. And while it'll face stiff competition, not least from parent company's Matebook D, it does appear to be a fairly enticing little number – particularly at that price. ®

Hands On Can it run Crysi... we mean, er, Fortnite? Yes, kids

Honor bound: Can Huawei's self-cannibalisation save the phone biz?

Long-Term Test Revisiting a feel-good hit of the summer

Confused by the new Huawei? You should be