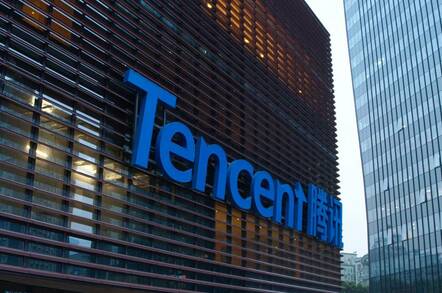 Chinese internet titan Tencent has revealed its Q4 2019 and full year 2019 results, and the numbers are lovely.

Annual revenue reached $54bn, a 21 percent rise. $16.4bn of that was operating profit, which rose 24 percent year on year.

To put that in perspective, Tencent’s 2018 revenue of $47bn put it at number 237 on the Forbes Global 500, ahead of Oracle, HPE and Accenture. 2019’s growth saw it jump ahead of Cisco and Lenovo, and fall just a billion or two short of LG’s and Facebook’s revenue.

Tencent operates WeChat, a chat platform with 1.16bn users, 180m of them paying monthly fees. It’s an online gaming giant that has started offering services beyond China. It runs online video services that hauls in revenue from both subscriptions and ads. And it runs a payment platform that’s gaining more traction with meatspace merchants and already handles an average billion transactions a day.

The company also runs a cloud spaning 53 availability zones spread across 26 regions, with physical presences in the USA, Canada, Germany and Russia in addition to plenty of Chinese and other Asian locations.

Speaking to analysts on an earnings call, chairman and CEO Pony Ma said Q4 2019 saw that cloud pass the million-paying-customers mark for the first time and win about US$2.5bn in annual revenue.

Like almost every business on the planet, Tencent is bracing for the impact of COVID-19.

But execs feel the company can rebound strongly thanks to AI-driven health services it deployed into WeChat to help users diagnose themselves during the pandemic. Such tools, execs said, should find wider markets in the future.

President Martin Lau told investors he predicts “short-term negative impact on revenue due to delayed implementation of projects” on Tencent’s cloud. “However, we believe the coronavirus outbreak capitalize to the expansion in industry demand and addressable market for long-term as enterprises embrace digital upgrades.”

“And that's why it's so important for us that we invest the money and invest time in really making enterprise facing apps, be all that they can be and we gave the example of the Tencent Meeting, video conference service that’s enjoyed spectacular growth. And that's partly because it's in the right place at the right time and serving a real need.”

“But that's also partly because I think we rushed out 14 updates in 40 days, which is incredibly fast in update pace for any app and difficult to get through the app stores actually. So anyway, we think that there will be some temporary changes in consumer behavior, revert to normal relatively quickly, but there will also be some structural changes to consumer and especially enterprise behavior that will be longer lasting.” ®