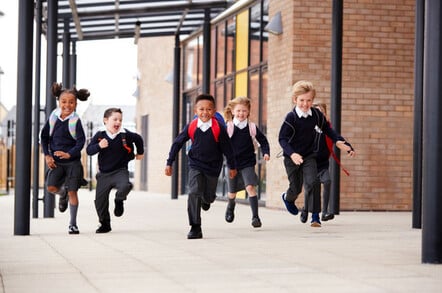 As the UK's parents prepare to take kids to school for the last time tomorrow, education tech supplier RM told the London Stock Exchange it anticipates a "material impact on trading".

UK prime minister Boris Johnson yesterday declared schools and colleges across England would shut down after pickup on Friday afternoon – the Republic of Ireland already shut its educational institutions down last week. Scotland's First Minister Nicola Sturgeon and Wales Education Minister Kirsty Williams have also set Friday as the last day for the countries' respective schools. For the time being, this is an "indeterminate period" in response to the rapid spread of the novel coronavirus discovered late last year, and an accompanying rise in symptomatic patients of COVID-19, the disease it causes. Examinations have been cancelled.

The Oxfordshire-based business said it would not pay out a proposed final dividend of 6p per share and added that the impact would also be felt "on financial performance for the full year" although it conceded that the effects were "difficult to quantify" right now.

The company, which had net debt of £30.0m as of 29 Feb 2020, described itself as being in a "robust financial position with a committed credit facility of £70m."

In the Group's most recent accounts for the year ended 30 November 2018 (PDF), revenues increased to £221m, from £185.9m the year before, with the biggest topline push coming from its RM Resources segment, which turned over £121.6m. The unit, which slings "curriculum resources" at early learning centres, primary schools and secondary schools across the UK and internationally, bought Trowbridge-based Consortium for £56m the year before, with accompanying distribution synergies, and a 41 per cent upswing in international business. Its Education unit revenues declined 4 per cent for the year to £67.6m after a number of big contracts ended, while its results segment grew slightly to £31.8m. Profit before tax was £21.2m.

It also said in the same annual results report that Brexit's impact would be "unfavourable" on the company. In 2018, the group had European sales of £12.4m, with £8.5m being physical product sales from its RM Resources unit and £3.9m software and service sales from its Results and Education units.

Back in fiscal 2010, RM turned over £380m. Its less healthy top line since then has been chalked up to a loss-making PC production line that it shut down in 2013 as it turned its hand to specialist software and managed services.

Jingle bells, RM tells, some staff to go away... via Skype

Hole in retirement pot widens to £35m, remains 'fly in ointment' for investors

RM to resell Apple, Lenovo, HP, Dell to YOUR children

Yes those firms killed our PC biz but if you can't beat 'em...

Linux code fortifier is told people are entitled to opinions