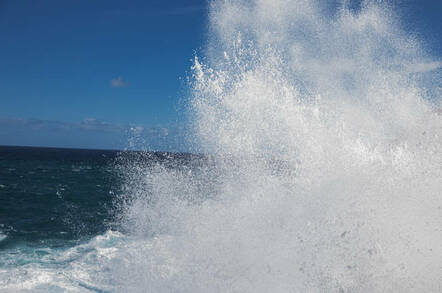 SpaceX has lofted another set of Starlink satellites despite an in-flight engine failure, although those hoping to watch a booster landing were disappointed as the veteran Falcon 9 first stage took a dunking.

Delayed after a T-0 engine shutdown on Sunday, the launch was the first time SpaceX had attempted a fifth flight of the same booster and was the second Falcon 9 sent upwards this month.

Things initially seemed to go well as the singed Falcon 9 left pad LC-39A at 1216 UTC on 18 March but viewers of the live stream would have been forgiven for thinking that something went foom at around the 2 minute, 20 second mark.

SpaceX did not comment at the time, and the booster continued its flight, with the second stage separating and depositing another 60 Starlink satellites in orbit.

However, SpaceX boss Elon Musk later confirmed that yes, an engine had shut down prematurely, but did not have an impact on the mission (more so on the ocean, we suspect.)

Yeah. There was also an early engine shutdown on ascent, but it didn’t affect orbit insertion. Shows value of having 9 engines! Thorough investigation needed before next mission.

A thorough investigation is indeed needed. The booster did not make it back to the "Of Course I Still Love You" droneship and while reusing the things remains a hugely impressive technical achievement, more than five flights will be needed per booster to make the figures work. In a briefing back in 2018, Musk told reporters that a Block 5 first stage could potentially be reused 100 times with some refurbishment. Quite a bit more than 5.

SpaceX has hopes for launching a crew on the Falcon 9 in the coming months, and while the incident was a handy demonstrator that hey - an engine letting go need not necessarily be a mission-ender, officials will want to know exactly what happened before sticking humans into a Crew Dragon. SpaceX has already sacrificed a Falcon 9 to demonstrate how effective the Crew Dragon's abort system is.

As for the Starlink satellites themselves, 60 more of the Internet-from-space objects are now in orbit much to the delight of astronomers around the world. During the launch webcast, a SpaceX commentator said that the application of paint to darken reflectivity had helped somewhat with the issue of the objects' brightness but that more work (possibly involving a sunshade arrangement) was slated for a future launch. ®