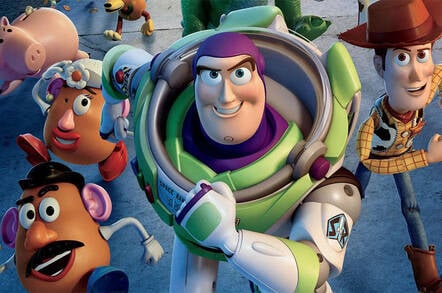 Two founders of animation powerhouse Pixar have won the 2019 ACM AM Turing Award, with a $1m prize, for their pioneering work on 3D graphics.

Pat Hanrahan and Ed Catmull are largely responsible for moving computer graphics from jagged polygons trying to represent reality to the smooth, shaded, 3D images that we take for granted these days; a process that took nearly half a century of hard work.

Their leaps in thought extended into pragmatic realities have forever changed how we interact with computer-created images and, as the Turing Award Committee acknowledged this week, “have had implications beyond computer graphics, impacting diverse areas including data center management and artificial intelligence.”

Although the pair are best known for the extraordinary leap in 3D animation that films like Toy Story displayed to enormous acclaim, their work began at university in the 1970s. Catmull did a PhD in Computer Science that was focused on getting rid of the jagged edges that were then a part of all computer graphics, because they used polygons, defined mathematically, to build up images.

He took a different approach, introducing curves into the programming through a combination of adding a z-axis to allow for image depth and texture mapping, where a 2D texture was wrapped around a three-dimensional object. The result was a smooth surface that allowed for all kinds of additional techniques that increasingly reflect how we experience the real world.

He founded the New York Institute of Technology (NYIT) Computer Graphics Lab which was one of the very first labs that were dedicated to computer graphics. He dreamed of making an animated movie using just computers - rather than, say, a stop-motion approach that used physical models photographed thousands of times.

And that dream became a reality when he was hired by Star Wars director George Lucas to move toward photo-realistic images. But it was when Apple co-founder Steve Jobs bought the animation division of LucasFilm and turned it into Pixar that things really took off. Catmull became president.

That’s where Pat Hanrahan comes in: he was one of Catmull’s first hires. Hanrahan worked at the NYIT Computer Graphics Lab that Catmull founded and he became the lead on a new graphics system that would allow the new curved surfaces to be given realistic properties, reflecting different textures and accounting for different lighting.

The key aspect of this system - later called RenderMan - was the concept of “shaders” which calculated the behavior of light separately from the animation of the shapes within a program. Instead, the color and texture was computed at points over the shapes: an approach that brought a new level of realism to the graphics.

He went on to perfect other rendering techniques, such as improving how skin and hair can be recreated realistically, making more realistic lighting effects, and modelling approaches that enabled animators to move the viewer through and into scenes, rather than observe them from a detached perspective.

In short, he’s a very clever man whose work has been behind every time you’ve sat in awe at an animation or CGI or computer game in the last 20 years.

But that’s only part of the story. Hanrahan left Pixar in 1989 and took an academic approach to the advances in computer rendering - in that he shared his ideas and innovations, rather than try to lock them down for maximum profit.

That open approach had an enormous impact not just on animation, but on the actual chips - the graphics processing units (GPUs) - that computers use to recreate the images that software like RenderMan produces.

His teams at Princeton and Stanford University developed programming languages for GPUs that changed how pretty much everything was done at that point. And while commercial versions were developed, he continued to work and push open-source languages.

The result of that decision was that, rather than everyone just enjoying the extraordinary scenes that recent movies have offered (scenes that would be literally impossible to create in real life), the techniques have spread into other fields, most recently - and perhaps most significantly - artificial intelligence.

Meanwhile, Catmull stayed at Pixar. where his academic approach meant that the animation powerhouse kept investigating in new techniques and technologies that you can effectively track by watching Pixar movies. The sense of motion, of increasingly real materials, and of advanced story-telling techniques were all innovations that were then pulled into the next film and the next film.

Thanks in large part to these two men’s 40+ years of work, leadership and guidance not only have millions of people been entertained but the boundary between the real world and the virtual world has been blurred in ways that we are only beginning to understand and enjoy.

Which is why they got the Turing Award. They also got $1m - courtesy of Google. They’ll pick up the award at a banquet in San Francisco on June 20 - at least in theory; it may be postponed due to current conditions. ®

Vid That's not stealing, it's downloading with style

Apple founder's name goes up above the front door

Lucasfilm also named: Says it has no need of techies