Temperatures can soar over 400C on the rocky world, and yet... 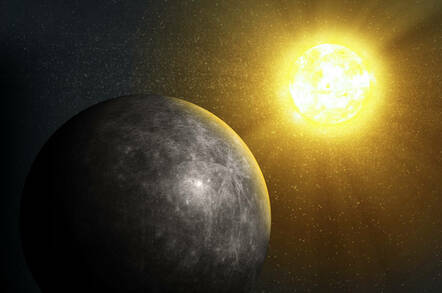 Video Mercury, the innermost planet in the Solar System, reaches searing temperatures. Yet ice still manages to exist on its rocky surface. How?

The heat from our star actually contributes to the formation of ice, according to a paper published in The Astrophysical Journal Letters on Monday. Mercury’s surface can get up to 400 degrees Celsius (752 degrees Fahrenheit) during daytime, a temperature that doesn’t support liquid water let alone ice. But academics have discovered pools of frozen water dotted on the tiny planet.

Here’s how they form: charged particles from the solar winds bombard the soil on Mercury’s surface. When a proton (H+) smashes into molecules containing hydroxyl groups (OH), it kicks off a chemical reaction to form water (H2O).

"These are like big magnetic tornados, and they cause huge proton migrations across most of the surface of Mercury over time," said Thomas Orlando, co-author of the study and a professor at America's Georgia Institute of Technology, School of Chemistry and Biochemistry.

Spacecraft spots possible signs of frozen water on the Moon

These water molecules rise above the surface. Sometimes they don’t survive and break apart under the sunlight. But in some cases, they float around and land in the shadows of Mercury’s craters.

These nooks and crannies receive little light and are kept at -200 degrees Celsius (-328 degrees Fahrenheit). Over time, the water molecules that settle here freeze and turn into ice. Here's a video illustrating it:

“The total amount that we postulate that would become ice is about [a trillion kilograms] over a period of about 3 million years,” said Brant Jones, first author of the paper and a researcher at Georgia Tech.

That only accounts for 10 per cent of the ice there, however. The rest was brought by comets and asteroids, the researchers believe.

“I would concede that plenty of the water on Mercury was delivered by impacting asteroids. But there’s also the question of where asteroids laden with water got that water. Processes like these could have helped make it,” he added.

Orlando reckoned impacting comets and asteroids may not even need to have water on them. “A comet or asteroid actually doesn’t need to carry water because the collision alone with a planet or moon can also make water. Mercury and the Moon are always being hit by small meteoroids, so this is happening all the time.” ®