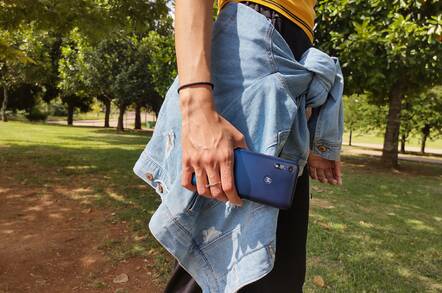 Motorola Mobility has lifted the lid on its latest budget blower – the pocket-friendly Moto e6s, which offers the most compelling, er, screen-to-price ratios on the market. Just £99 gets you a phone with a 6.1-inch HD screen.

Before we delve into the gory details, it's worth mentioning that there are technically two different versions of the Moto E6S. The first was launched in India last September, and was for all intents and purposes a rebadged version of the Moto E6 Plus. The new version, which will be sold across Europe, South America, and Asia, has some key differences – but also some crucial similarities.

For starters, it contains the same MediaTek Helio P22 chipset, which uses eight Cortex A53 cores. There's 2GB of RAM, compared to the 4GB found on the older Indian version.

While punters on the subcontinent got 64GB of storage to play with, the alternative version ships with 32GB of internal memory. At least you get a MicroSD slot – although it only supports cards up to 256GB of memory.

The selfie camera, which is housed in a teardrop notch, also sees a major downgrade – going from 8MP (on the Indian model), to just 5MP here. The rear-facing camera constellation remains the same though, with a 13MP primary sensor, paired with a 2MP depth-sensing camera, which will allow users to take portrait shots with a satisfying amount of background blur.

There's a 3,000mAh battery, which charges at 5W over – as you may have guessed – MicroUSB, in addition to a 3.5mm headphone jack, Bluetooth 4.2, and 2.4GHz Wi-Fi b/g/n. As one might expect from a phone retailing under £100, there's no NFC radio, making Google Pay transactions a frustrating impossibility. Another nice touch is the fingerprint reader, which is housed on the Motorola logo.

The Moto e6s runs Android 9.0. As is the case with Motorola's budget blowers, this is the stock configuration, with no divisive skins or bloatware to annoy.

Given the phone's price point, the Moto e6S comes with its fair share of compromises – ranging from its sluggish processor and paltry serving of RAM, to the fact that it clings stubbornly to the aged MicroUSB standard.

If you're tempted, you can grab the Moto e6S from the usual places, including Amazon, John Lewis, Tesco, and Argos.

That said, I'd also consider the Nokia 2.3 in its place. Although it has similar specs, it benefits from the Android One program, which guarantees three years of monthly security updates, as well as OS updates for two years after release. ®