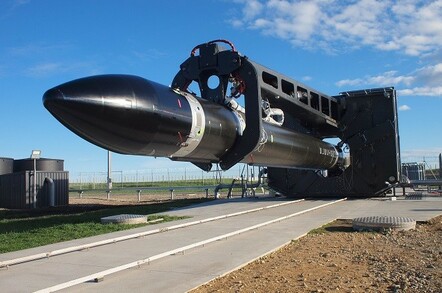 Flinger of small satellites Rocket Lab has made a move to tighten up its supply chain with the acquisition of Toronto-based Sinclair Interplanetary.

The deal will see Rocket Lab pick up the satellite hardware maker for an undisclosed sum.

Founded by Doug Sinclair in 2001, the company is focused on hardware aimed at micro or nano-satellites and churns out star trackers, reaction wheels and other choice hardware needed by the industry. Including a few satellites that did not make it to orbit, Sinclair's wares have turned up in 100 spacecraft over the years.

Indeed, two more of Sinclair's star trackers went to orbit onboard the 10th Electron launched by Rocket Lab, the amusingly titled "Running Out Of Fingers Mission." Those trackers were used by ALE-2, a satellite designed to create artificial shooting stars by simulating re-entering meteor particles.

In an interview with The Register, Rocket Lab CEO Peter Beck said that as the company ramped up production of its own Photon satellite platform, it had identified a number of components that were "really constraining the supply chain."

The star trackers and reaction wheels, such as those provided by Sinclair are, according to Beck, "incredibly long lead-time items."

"It became really apparent," he went on, "that we either needed to build our own or acquire a company that built them."

Beck told us that Sinclair would continue as it had in the past - except now with the resources of Rocket Lab behind it - and continue to sell its components to the larger market. We imagine that Rocket Lab will probably be first in line.

As for the structure of the company going forward, Beck explained that Doug Sinclair owned the eponymous company outright and would continue to run it while also taking on some roles within Rocket Lab. Assuming the Canadian government gives its approval to the deal.

Reusability, going to Moon, dealing with COVID-19, and that's a No to Scotland, thanks

We also asked Beck how the whole reusability thing was going, since the upcoming launches won't feature the equipment seen on recent Electrons. The CEO told us the previous two flights had demonstrated what he described as "the hardest thing to solve": keeping the stage in one piece as it goes through "the wall" and re-enters the Earth's atmosphere. The next step would be working on parachutes before finally an attempt at the crowd-pleasing helicopter recovery.

For those keeping count, Beck expects the parachutes to make an appearance on the 17th Electron.

The company has also been selected by NASA to launch the Cislunar Autonomous Positioning System Technology Operations and Navigation Experiment (CAPSTONE), a pathfinder for the hoped-for Lunar Gateway.

While the Lunar Gateway looks set to be on the chopping block (or at least delayed) in the drive to get boots back on Moon by 2024, Beck and his team are continuing work on the mission as planned. The flight will see the spacecraft undertake eight phasing loops to raise the orbit before a final translunar injection burn. "It's a complicated task," admitted Beck, "but something that the Photon platform is ideally suited to."

The effects of the COVID-19 pandemic are also being felt by the company, which had hoped to commence US operations from its Launch Complex 2 at the Mid-Atlantic Regional Spaceport on Wallops Island, Virginia.

"We had the vehicle, out there on the pad a couple of days ago," Beck said, referring to the Electron vehicle due to launch the US payload by the middle of the year, but with staffers unable to travel, "we'll just have to play that one by ear." Indeed, he went on to tell us that half of the Rocket Lab team had been to the new pad over the last month in an effort to get things ready.

"We're not predicting the next [New Zealand] launch, having to change the launch date," he added, "but subsequent launches… who really knows?"

We asked Beck if he'd considered taking up residence at one of the proposed launch sites in Scotland and the news wasn't good for Scottish dreams of spaceflight. "We couldn't really make a business case for that particular region," Beck told us. The biggest issue was available trajectories for the Electron that wouldn't risk an abort somewhere less than ideal: "When you run the trajectory with an Electron launch vehicle," he said, "there were very few trajectories that passed all our safety cases."

While Rocket Lab may not be coming to Scotland any time soon, Beck reckoned the experience of other providers might differ: "different launch vehicles with different flight termination systems, different propellant masses and whatnot may be different…"

And the long-awaited monthly launch cadence? "We're certainly producing a vehicle every 30 days; the factory is full... provided customer payloads turn up; we're ready to support a one-a-month launch." ®