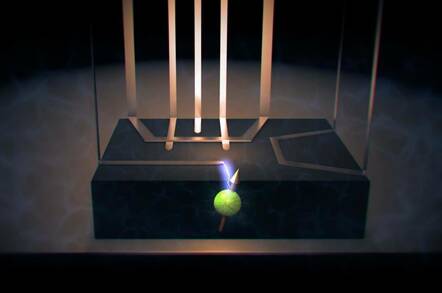 Artist's impression of the nuclear spin of an antimony atom being controlled by an electric current. Image credit: UNSW/Tony Melov

A group of scientists have accidentally proven a near 60-year old theory correct, thanks to a botched lab experiment.

Nicolaas Bloembergen, the late Dutch-American physicist who won the Nobel Prize for his contributions to laser spectroscopy, previously predicted that it was possible to control the nucleus of a single atom with electric fields in 1961. His idea, however, was never experimentally proven and was left largely forgotten until now.

Fast-forward 59 years, and it appears that researchers led by the University of New South Wales (UNSW, Sydney), Australia have finally managed to solve the longstanding mystery. "Our original goal was to explore the boundary between the quantum world and the classical world, set by the chaotic behaviour of the nuclear spin. This was purely a curiosity-driven project, with no application in mind," said Serwan Asaad, a postdoctoral researcher studying quantum computing at UNSW Sydney.

Asaad and his colleagues set about probing a single atom of antimony, a metalloid element, fabricated on a silicon wafer with nuclear magnetic resonance. To do this, the team had to place the device in a strong magnetic field. They generated the magnetic field by applying an electric current to a superconducting magnet and directed it towards the atom’s nucleus using a specialised antenna.

"However, once we started the experiment, we realised that something was wrong. The nucleus behaved very strangely, refusing to respond at certain frequencies, but showing a strong response at others," said co-author Vincent Mourik, another postdoctoral researcher at the USNW Sydney, working in the same department.

Eventually they realised they had accidentally destroyed the antenna by cranking up the strength of the magnetic field. "What happened is that we fabricated a device containing an antimony atom and a special antenna, optimized to create a high-frequency magnetic field to control the nucleus of the atom. Our experiment demands this magnetic field to be quite strong, so we applied a lot of power to the antenna, and we blew it up!" Asaad said.

With the antenna borked, all that was being transmitted was an electric field instead. The researchers may have failed to induce nuclear magnetic resonance in the antimony nucleus but they had managed to get it to interact with just an electric field instead, proving Bloembergen’s theory. Results from the "failed" experiment have been published in research paper in Nature.

"I have worked on spin resonance for 20 years of my life, but honestly, I had never heard of this idea of nuclear electric resonance," said Andrea Morello, a professor of quantum physics at the USNW Sydney. "We 'rediscovered' this effect by complete accident - it would never have occurred to me to look for it. The whole field of nuclear electric resonance has been almost dormant for more than half a century, after the first attempts to demonstrate it proved too challenging."

'The nuclear charge is slightly potato-shaped'

The electric field interacts with the nucleus via its "electric quadrupole moment," Morello explained to The Register. "You normally think of an atomic nucleus as a sphere of charge, but that's just an approximation. In reality, the nuclear charge is slightly potato-shaped. So the electric field can be used to reorient the 'potato' along a certain axis." In other words, the researchers have managed to manipulate the direction of the spin by applying an electric field.

Although the discovery seems incredibly niche, it potentially has wide implications for areas like quantum computing. "This discovery means that we now have a pathway to build quantum computers using single-atom spins without the need for any oscillating magnetic field for their operation," Morello explained. "Moreover, we can use these nuclei as exquisitely precise sensors of electric and magnetic fields, or to answer fundamental questions in quantum science."

Not all quantum computers require magnetic fields, however. Morello told us that the ones developed by Google and IBM don't have to because the quantum information is not stored in the orientation of the nuclear spins in atoms.

But considering the latest experiment only manages to manipulate a single nucleus for just 0.1 seconds, any practical applications are still a long way off. "This is a very long time in the quantum world!," Morello told El Reg. "The most advanced quantum computers, like those made by Google and IBM, have dephasing times of about 10 microseconds, that is 10,000 times shorter."

Morello and his colleagues are working on controlling a quantum system with more than just one nucleus with electric fields. ®