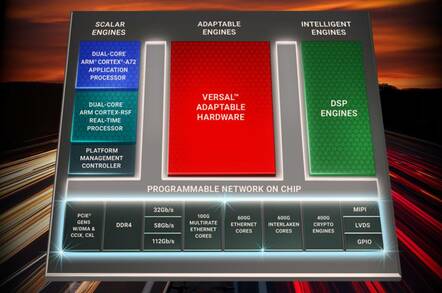 Xilinx will today announce an FPGA that is a little bananas: the Versal Premium, aimed at cloud builders and telcos.

It's the sort of component that if you need to ask how much it costs, it's probably not for you. Instead, you need to specify how many you need, and the price will be calculated from there.

It includes a boatload of fixed silicon for performing networking, signal processing, and encryption at high speed, CPU cores running application code, and a big block of reconfigurable circuitry that can be arranged to accelerate specific workloads in hardware.

The reprogrammable hardware can be designed using high-level languages, such as C/C++, or low-level SystemVerilog and the like. It can be reconfigured within tens of milliseconds, we're told, so you can imagine one of these in a cloud server or a telco's routing gear, loading in different blocks of customized hardware acceleration on demand, and processing packets, video transcoding, analytics, or AI stuff in real-time as information flows through.

The reconfigurable hardware slab contains up to 7.4 million system logic cells, which is a lot, and 3.4 million look-up tables (LUTs). That's enough to simulate your own CPU core, though that's not really the intended use case.

Xilinx is pitching this at organizations that would like to use their own customized silicon in cloud and communications infrastructure, but don't really want to splash out $25m-plus to develop their own chips over three to four years. Instead, they can opt for an FPGA in the short-term that has a shedload of programmable gates for speeding up custom workloads, and a clump of built-in acceleration for encryption and networking.

The cryptography engines, for one, support AES-GCM-256 and 128, MACsec, and IPsec.

The Versal Premium silicon, part of the ACAP family, is due to ship as samples in the first half of next year. Documentation is available now, if you want to take a look, and tools to prototype and configure it are expected to land in the second half of 2020.

Free for every Reg reader – and everyone else, too: Arm Cortex-M CPUs for Xilinx FPGAs

XDF Like the blueprints we gave away last time... but... better

Hot Chips Including another round of 10th-gen Intel Cores