You've duked it out with OS/2 – but how to deal with these troublesome users? Nukem

Disk-wiping utility was meant to be a force for good, not evil 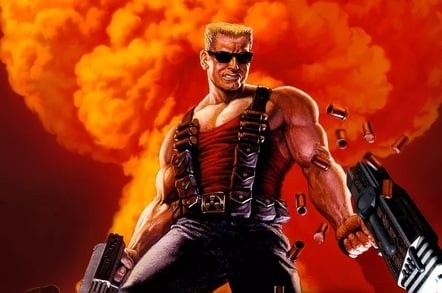 Who, Me? Welcome to another leap back to the shooters of the '90s, and how to deal with them, in The Register's regular Who, Me? feature.

Today's story comes from the southern hemisphere, and a brave soul working in the technical support department for a major bank. It was the early 1990s and "Bill", which is not his name, dealt with the systems used by the help desk to support staff and customers.

In what will break many a fanboy's heart, "our LAN team was recycling OS/2 Warp PC's, rebuilding them as Windows 3.1 and later as Windows 3.11."

OS/2 was a joint development project taken on by IBM and Microsoft back in the 1980s and was regarded as the future by evangelists of the time. Things turned sour as sales of Windows 3.0 took off and Microsoft went its own way, taking its bat, ball and Windows NT with it. And so it was that Bill and co. were recycling those PCs.

The rebuild process was tedious and required user intervention at various stages. Bill had a chum, Dan, who was a tad frustrated by this since pretty much everything could be scripted aside from deleting the partitions. A pesky direct input was needed.

"Could I help? Damn straight I could. C/C++ compilers back in the day let you talk straight to the disk using BIOS calls," explained Bill. "Modern Windows rudely inserts itself into that process."

Having scanned the C/C++ and BIOS reference info, Bill crafted 13 lines of code to overwrite the first 512 bytes on the first 128 HDDs found attached to the PC. "I'm sure that there were always less than 4," he said, "so the process took only 1 to 2 to seconds to run, even on old 40GB IDE HDDs. Essentially the time that it took for the disks to spin up."

It asked no questions, and just nuked the Master Boot Record from a great height. It made the drive appear as blank and unformatted to Dan's script. Bill named this destructive bit of code "nuke.exe".

Note: we'd recommend using something a little more... shreddy... if you want to completely wipe all data before passing on a hard disk.

Dan was happy, Bill was happy, and the tedious process of replacing OS/2 with Windows could be accelerated.

However, Bill's nifty – and nasty – utility was about to be put to more nefarious purposes.

"It turns out the LAN team was also struggling with bored bankers installing Duke Nukem 3D on the network and consuming resources. They were forever finding copies of the game in the shared drives, but they couldn't find out who was installing them."

Released in 1996, Duke Nukem 3D was a first-person shooter in a similar vein to Doom, which caused so much hilarity on the token ring last week.

"They sent shouty emails to all and sundry, but the game files kept reappearing," recalled Bill.

However, the ever-creative Dan came up with a solution to the problem. He took Bill's utility, renamed it to "duke3d.exe" and replaced the original duke3d.exe in the shared drive folder with it.

"He just waited a day or two for the b(w)ankers complaining that their PC's wouldn't boot anymore and gave them a personalised talking-to."

And the less said about a friend of Bill's popping a copy of the MBR-wiping version of duke3d.exe into an email to the help desk of a certain Big Blue company, complaining "It keeps crashing my PC", the better.

Ever crafted a solution to a problem only to find it bent to nefarious ends? Or done something a little destructive in a hunt for time-wasting users? We've never created anything as horrid as a boot record killer called "duke3d.exe" – not on purpose anyway – but maybe you have? Email Who, Me? to confess all. ®