What's inside a tech freelancer's backpack? That's right, EVERYTHING 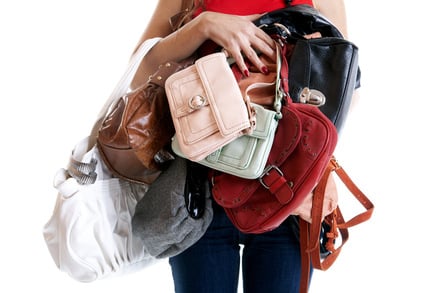 Something for the Weekend, Sir? Paper jam. Yum, my favourite flavour.

Good job it's in plentiful supply. The taste takes my mind off the zombie plague. At least, it would if everyone would take off their facemarks. It's like trying to work in the middle of the world's dullest Holby City cosplay meet.

Modern printing devices shouldn't be jamming as often as this, though. What's up with this bugger? Not that I'm going to poke around with it: I'm on client premises and it's their kit. If I touch anything inside, I'll be blamed for its last three years of logged print errors.

Back to the meeting.

Of course, when I say "meeting" I mean four of us have wheeled our chairs together to huddle behind a colleague at her desk. There are no free meeting rooms today in this horrendous hellhole of co-working cacophony.

Of course, when I say "her desk" I mean whatever hotdesk she found unoccupied upon arrival at her well-decorated but ill-equipped office that morning.

Of course, when I say "office"… well, you get the idea.

As for the "huddle", this is even more difficult that it sounds because the floor space around her virtual cubicle of temporary impersonal co-work existence is an inaccessible scrubland of chunky backpacks. From time to time we work out our abs trying to shuffle our chairs closer and keep getting shoulder straps caught in our casters.

Bloody co-working offices. Apart from a handful of decent places – those run as cooperatives or by private owners who actually give a shit – the vast majority of co-working operations are property franchises, cynically run by overpaid loons with an overgrown and woefully misguided sense of self-belief who have no idea what working in them can be like.

Some people think the co-working space boom is a massive con; personally, I think it's a masterclass in creative marketing. If you can rebrand bricks and floorspace as a kind of disruptive tech startup to those with more investment cash than sense, who am I to doubt your genius?

Back in 2014 I tried to redesign my Hoxton office into an inexpensive tech co-working and new media training space in the heart of London's Tech City but came to a halt while financing the final refurbishment. Banks and investors weren't interested in my pitch concerning paint, tables and glass walls: they wanted to hear bullshit about coding apps and keywords. More fool me.

Emboldened by my failure, I duly transformed my application for a paint-job loan into an application for a tech development grant from the London mayor's office. Unfortunately, it turned out the mayor at the time – a certain Boris Johnson (whatever happened to him?) – would only take IT lessons from American pole dancers. Even more fool me.

The horrors of the WeWork debacle are recounted in some detail in the WeCrashed podcast mini-series. Founder Adam Neumann gets the blame but I simply marvel at investors willing to take such an expensive punt on such an obvious dead end.

I mean, if you're going to punt at all, don't give away shitloads for no return. Do the opposite, like the regulars on Dragon's Den who put up small amounts and demand big returns. Or do like my one-time Hoxton neighbours Forever Beta, a small independent advertising agency which said this week it was offering Elon Musk a (frankly derisory) 5 per cent of their business if he makes space for them on his Mars mission.

One assumes they mean ad space, not an actual seat – unless they have a particularly smarmy Don Draper in the office they're hoping to see the back of.

Just think, you travel 260 million kilometres only to stumble across a bloody advert. It's enough to make you scream. Except in space, no one can hear you.

It's all a bit of fun, of course, and why not? The worst that can happen is for Elon to agree. It's reminiscent of the notorious Saturday Night Live near-miss in which John and Paul nearly reformed The Beatles after being offered $3,000 as a joke.

Anyway, the floor around our feet is crowded with backpacks. Why?

As you may well be aware from personal experience, even full-time employees have to carry all their stuff with them when hotdesking. You can't leave stuff on the desk or hang it over the back of the chair because it's never your desk or chair. Nor do hot desks come with pedestal drawers for keeping documents and stationery overnight.

There are lockers at many co-working spaces but these have been baggsied long ago; by whom is a mystery to all who work there. Look closely and you will find a layer of dust has settled on some of the padlocks. There could be dead bodies in there for all you know.

So we lug backpacks everywhere we go. Me, being freelance and all that, I have to pack rather more into mine as I must be prepared to work in variety of poorly equipped client offices across a broad spectrum of hopelessness.

Laptop and cables, and duplicate cables just in case; tablet and recharger; two smartphones and their own rechargers; three types of video cable, all of them actually long enough to reach from a boardroom display to the table; every Mac and PC connector and adapter known to humankind; external drives; the list goes on.

My most essential piece of kit is a four-way power extension cable and block. In 26 years of freelancing, I have yet to work in a client office that had one of their own.

Depending upon the length and purpose of my visit, my backpack can weigh between 8 and 14kg. Good posture learnt from karate lessons protect my back, although since losing weight I find I have to lean forward more. The real trick is trying to look nonchalant at the easyJet boarding gate.

That reminds me, before I go home this evening I will have to nip around the building to collect all the items I've lent to colleagues throughout the day. Portable rechargers, USB-C adapters, that kind of thing.

The CIO borrowed my spare MagSafe cable as he somehow procured "the wrong type". The CEO is using my power extension block and extra-long HDMI cable for her presentation in the boardroom. The overly nervous health-and-safety rep has borrowed my hand sanitiser gel and is probably still washing her hands, counting 20 seconds while humming the theme from 28 Weeks Later, just like I showed her.

Ah, back to the meeting. I nudge a backpack gently to one side with my foot and ask whether we should be taking notes. Yes, yes, they all agree and look at each other blankly. None of them has a pen.

Co-working offices stock a lot of coffee and sometimes even beer but they don't generally provide a stationery cupboard.

I pull a cheap ballpoint from my backpack. Now everyone else wants one so they can each take notes too. Good job I always pack 12 of them just in case. Handing them out, I feel like Leslie Crowther on Crackerjack. It's enough to make you drop a cabbage.

Oh, now what? Ah, you have nothing to write on. Does nobody have a notebook? I'm about to reach into my backpack where I always keep a clutch of small ringbound notepads when a colleague pipes up: "No worries, I'll get some paper."

He strides over to the printer, yanks out a few sheets from the input tray and rams the cassette back in with his knee.

Alistair Dabbs is a freelance technology tart, juggling tech journalism, training and digital publishing. He has tried many backpacks and feel that none of them are very good at including all his kit and his lunch. He refuses to switch to a wheely case as it would be an admission of defeat. And he dislikes the noise.@alidabbs

Something for the Weekend, Sir? The inevitable return of Norbert Spankmonkey