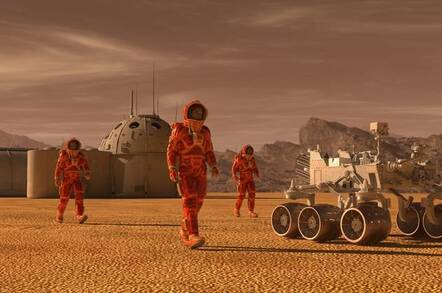 NASA’s latest Martian rover, due to launch in July and being assembled right now, finally has a name: Perseverance.

The moniker was chosen by Alexander Mather, a seventh-grade student – that's Year 8 in England and Wales, or 11 to 13 years old, depending on where you are – at Braddock Secondary School in Virginia. Mather, who won NASA's “Name the Rover” to well, name the rover, was visited on Thursday by Thomas Zurbuchen, a top brass at the US space agency.

Kids across the States were invited to propose a name for the machine, and had to submit no more than 150 words each explaining their choice. Some 4,700 volunteers sifted the thousands of submissions, and whittled down the entries to 155 semifinalists. Nine finalists were picked, all with predictably sensible names, and from that pool Mather won the golden, er, naming ticket.

“Alex and his classmates are the Artemis Generation, and they’re going to be taking the next steps into space that lead to Mars. That inspiring work will always require perseverance. We can’t wait to see that nameplate on Mars.”

Artemis is NASA’s grand plan to send the first woman and next man to the surface of the Moon by 2024. The agency hopes the Artemis program will act as a catalyst for colonies on the Moon by 2028 and journeys to Mars less than a decade later.

Before then, however, Perseverance will case the Red Planet for us here on Earth: it's due to set down on the cruel dust world in mid-February next year. The wheeled robot will attempt to sniff out signs of microbial life hidden in the planet’s rocks, and will be festooned with cameras and its own helicopter to beam back images of the Martian terrain.

It will also collect samples that can be sent back to scientists on terra firma to get a better understanding of Mars' climate for future human exploration – if a crewed-mission is ever attempted.

"This was a chance to help the agency that put humans on the Moon and will soon do it again," said Mather. "This Mars rover will help pave the way for human presence there and I wanted to try and help in any way I could. Refusal of the challenge was not an option."

It’s not the first time NASA has turned to America’s school students for inspiration in naming their gizmos. Curiosity, still bombing around Mars to this day, was named by Clara Ma, a sixth grader at the time in 2009. ®