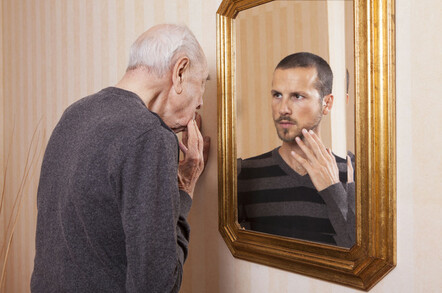 Episode 5 I am having an existential crisis.

In front of me is a youth, no older than the PFY was when I first met him, full of enthusiasm for a role in IT. "Green and keen" as the saying goes.

To him the prospect of IT support is a limitless expanse of exciting experiences – a veritable cornucopia of learning at his gesture-enabled fingertips.

He's young, mildly entitled and will never feel the sting of a lowly helpdesk position. His grades and experience are such that he's destined for the fast tracks of either IT Management or IT Project Management – whichever pays the most at the time. The world is his oyster.

He may even be my Boss someday...

And he is here at Mission Control – not to try and glean favours, not to throw his fate-based birthright around and certainly not to ask leading questions designed to trap the unwary.

He has come to seek knowledge.

He wants to know how a career in IT really works.

Hence my existential crisis. On the one hand I could tell him that a career in IT will bring him into contact with the leading minds of his age and will open doors to unseen technical wonders, promotion, popularity, riches and perhaps even one day a knighthood. Or I could tell the truth and say that the pursuit of professional excellence in IT will leave him a bitter and twisted husk of a man, trusting no one and with a cynical streak so wide they could land an A380 on it.

The crux of the crisis, though, is whether he deserves that. Recounting the lowlights of my lifetime of disillusionment to him would be a bit like taking a hammer to the head of an unsuspecting and naively trusting pet lamb.

Or do I take what some would call a moral path and lie – leave him to find his way through a career in IT where each layer of trust is relentlessly peeled away by clients and vendors alike until all that's left is a disenfranchised professional with a head full of knowledge and a back pocket full of powdered glass – for when it's his turn to make tea?

On the one hand there's the brutal – but some would say kinder – hammer to the lamb's face, but on the other there's the deaths of a thousand demanding incompetents!?

Do I tell him about the pre-sales people he'll meet with no understanding of the technology they're promoting but who have an almost religious fervour to their assurance that it will be just what he's looking for.

Do I tell him about the technical sales people that will follow in the next rank after the pre-sales people, who will try and sell him futureproof kit which will be discontinued, scant months after purchase?

Or do I tell him about the customer relationship managers who will follow – trying to convince him to replace that same kit about 11 months into its "infinite" lifetime with newer kit with features that no one will ever need?

Do I preach about the shift from selling a software product to leasing it so as to convert the client into a revenue stream with no added value?

Or do I tell him about the users – many of whom believe that successfully watching an Xbox upgrade has bestowed upon them the technical wherewithal to challenge a group policy put in place to protect the rest of the company from their pedestrian attitude to data security?

Maybe I tell him about the leagues of managers he will have – and the importance of tracking which building site is about to do a concrete pour of a deep foundation. Maybe I coach him on the virtues of always having a roll of carpet, a spade, some lime and some potential uncharted wasteland on hand.

And this kid is keen. He wants to work for free to get some practical experience of what the IT industry is really about. He's skilled, intelligent and he looks like he could come up with his own solutions for problems without relying on the burnt-out has-beens that have gone before him.

And as much as I see his naivety as a hindrance to his future prospects, and even though I think that he will be walked all over by clients, vendors and managers alike, I still can't bring myself to break him on the rack of my past experiences.

Looking back at my past, I can only wish that someone had provided me with some sort of gentle guidance to steer me in the right direction.

I must do for him what I would want in his place.

Because mostly, I'd want to be taught a lesson – and who better to teach you than experience?

Besides, all that lamb business has me gagging for a Kabuli palaw from the Afghani place down the road and it's only an hour to lunchtime. Or it's lunchtime – if you're a bitter and twisted husk of a man.