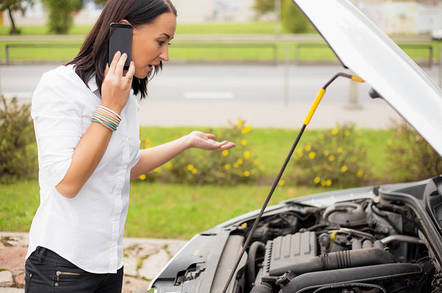 Updated Ride sharing service, Uber, and its culinary tentacle Uber Eats, have fallen down and there does not appear to be a helpful driver to pick them up.

The problem is global and, judging by the caterwauling on social media by those forced to stand in the rain, or prepare their own food, kicked off at around 3pm UK time.

It appears that drivers are unable sign into the Uber app or accept ride requests. Customers can't get rides. Lyft is probably chortling with glee.

Drivers are going to need some type of compensation for this.. I was alerted for 15 rides in 30 minutes and the app kept dropping and not letting me accept the rides

The company has yet to comment on the cause of the woe, preferring instead to reply to the odd angry tweet or two to the effect that yes, it knew its feet were pointed skywards but it is really, really trying its best to sort things out.

The Reddit driver forum (a handy place to look if you're ever wondering why that person in the rusty Ford only gave you three stars) is alive with drivers from around the world struggling to get online and serve increasingly desperate customers. One observed: "Fml I was sitting in the middle of a huge surge trying to accept rides and they wouldn’t go through."

One group unlikely to be shedding any tears over the company's discomfiture are London's cheery black-cab drivers, who saw Uber declared unfit to run a minicab business in the UK capital last year, part of an ongoing legal process. Uber has also had to crack open the piggybank to make employee harassment claims go away.

There is no word yet on if it will compensate drivers left high and dry by its borkage. Certainly, while it likes to trumpet its ability to "ignite opportunity" by setting the world in motion, it has also managed to ignite cash at an impressive rate.

The Register has contacted Uber for an explanation of the outage, but has yet to receive a response. The tagline for its support orifice is: "Here to help! Lost something?"

How about your network? Did you drop it down the back of a Prius seat? ®

Uber has clambered back oline and a spokesperson at the company sent us a statment:

"Within the last few hours, an operational error resulted in the temporary loss of access to the driver app. All impacted accounts have since been restored, and our support teams have been working to answer any outstanding customer inquiries. Reliable access is at the heart of our platform, and we regret any inconvenience caused by this interruption."