The return of the cashpoint bork as support dries up 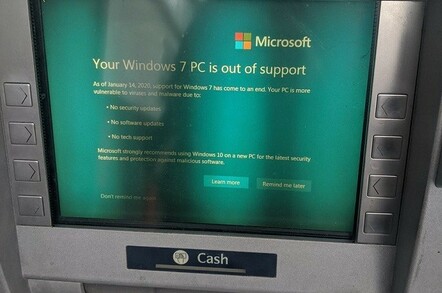 No beer tokens for you today (pic: Dr. David Mills)

Bork!Bork!Bork! ATM customers have been treated to that most special of sights, a refusal to dispense cash unless Windows 7 gets the update goodness it craves.

Normally when this hack visits a cashpoint, the cheery screen offers all manner of exciting options and amounts to withdraw. Alas, selecting one of the more impressive numbers results in a stern "Oh no you don't, and I think you know the reason why, don't you?"

"I work in journalism and not PR?"

In this case, Twitter user Dr David Mills didn't even get that far, and found an all too familiar message on the screen. Windows 7, as Microsoft has repeatedly told anyone who'll listen, is out of support. It has been out of support for over a month, and you really need to either upgrade it or pay the Windows giant for a few more years of security updates.

Sadly, the memo has not reached UK retail banking giant Barclays, whose terminal Mills said it is. Mills told us that this particular unit can be found on London's Mile End Road, at the Queen Mary University of London.

Wisely, Mills didn't risk sticking a card into the machine, having experienced another perform a surprise reboot after PIN entry a few months previously. The screen itself did not respond to prodding, with Windows 7's bleating remaining on display.

The Register contacted Barclays, but have yet to receive a response with regard to why this poor machine appears to be so neglected. Even Windows Embedded POSReady 7 will linger to 2021.

Unless, of course, this is all a guerrilla marketing campaign by Microsoft to remind holdouts that there'll be no more security updates for the venerable OS. After all, the Barclays group made a pre-tax profit of £6.9bn for FY2019 (PDF), so we're sure the odd licence or two shouldn't be beyond them, right? ®