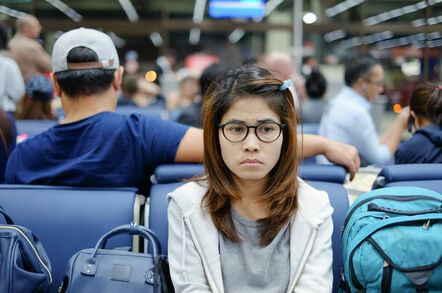 The Information Commissioner's Office has fined Cathay Pacific Airways £500,000 for leaky security that exposed the personal data of 9.4 million passengers - 111,578 of whom were from the UK.

The breach, which occurred between October 2014 and May 2018, exposed passengers' names, passport and identity details, dates of birth, postal and email addresses, phone numbers, and travel history, as well as 430 credit card numbers, 27 of which were active.

The unauthorised access was first suspected in March 2018, when Cathay's database suffered a brute force attack, and confirmed in May. A Cathay Pacific spokesman said at the time that the combination of data accessed varied for each affected passenger.

The ICO investigation found that Cathay's systems were affected by malware that harvested the data. Several errors with Cathay's security were found along the way, including backup files that were not password protected, unpatched web-facing servers, an out-of-support OS, and inadequate antivirus protection.

"This breach was particularly concerning given the number of basic security inadequacies across Cathay Pacific’s system, which gave easy access to the hackers. The multiple serious deficiencies we found fell well below the standard expected," said Steve Eckersley, the ICO's director of investigations.

"People rightly expect when they provide their personal details to a company, that those details will be kept secure to ensure they are protected from any potential harm or fraud. That simply was not the case here," he added.

In response, Cathay Pacific said in a statement: "We have co-operated closely with the ICO and other relevant authorities in their investigations. Our investigation reveals that there is no evidence of any personal data being misused to date."

The company added that it had already made improvements to its IT security.

The £500,000 fine is the maximum penalty that can be applied under the Data Protection Act 1998. The legislation was replaced by GDPR but because the timing of the Cathay breaches, it was investigated under the old rules. The new law, which applies to any incident after 25 May 2018, gives the commissioner power to fine companies €20m or 4 per cent of their global turnover.

The news comes on the back of the ICO's record £183m fine on British Airways last month, after a breach in 2018 exposed roughly 500,000 passengers' details. The fine process - since delayed - was the ICO's first major penalty under GDPR. It accounts for 1.5 per cent of BA's 2017 turnover, meaning it was not the maximum penalty. BA said it would challenge the fine. ®

Brit pilots agree: Get gizmos' batts out of holds