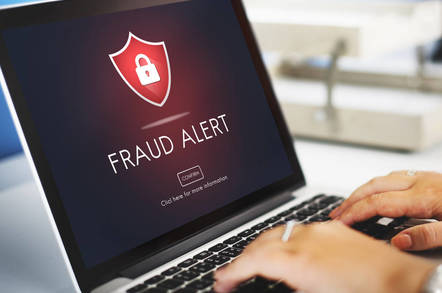 A US bloke was charged with fraud and tax evasion on Tuesday after allegedly duping tech companies into replacing kit he never owned.

Prosecutors in Pennsylvania accused Reece A. Line, 23, of Pearland, Texas, of participating in a scheme alongside others to defraud Amazon, APC by Schneider Electric, Cisco, the Neat Company, and iRobot Corporation.

Beginning in 2014 and continuing through June 2017, according to the charge sheet, Line and associates took steps to conceal their identities by registering internet domains using VPNs, Bitcoin, and false information; by creating email addresses associated with those domains; and by setting up prepaid mobile phone accounts under false names.

With this web of fake identities, Amazon gift and debit cards, and the addresses of vacant homes, Line and his co-schemers, it is claimed, established fake Amazon customer accounts. And they used those accounts to contact Amazon customer service and claim that real orders, paid for with gift and debit cards, never arrived to induce Amazon to send replacement products at no charge.

Amazon, the court filing [PDF] explains, will replace damaged or never-delivered items, referring to them as "concessions."

The other vendors allegedly were targeted with similar schemes, though without any initial purchase. Line and his associates, his indictment claimed, "obtained and ascertained serial numbers for NeatConnect Cloud Scanners, Roomba 980 Robotic Vacuums, APC Smart-UPS products, Cisco computer hardware, and other items that they did not own or possess."

Using these serial numbers, they supposedly forged receipts and made false warranty claims to obtain replacements for products they never possessed.

Cisco appears to have been particularly hard hit. It's claimed that Line and unnamed co-conspirators submitted over 100 Cisco Warranty and Cisco SMARTnet service requests, and managed to dupe the company into shipping 81 pieces of equipment worth over $1.9m. And they sold these products via eBay or Amazon seller accounts, we're told.

Such schemes have become rather common. Last November, 14 people were charged with importing fake iPhones so they could return them for genuine replacements. And in 2018, another case out of the USAO in Pennsylvania accused a man of defrauding Cisco and Microsoft through bogus product replacement requests.

Line faces 22 counts of mail fraud, eight counts of wire fraud, and three counts of tax evasion. If convicted on all charges, he faces up to 825 years in prison, somehow followed by five years of supervised release. There's also a potential fine of up to $8,250,000, more than four times the proceeds of the alleged crime spree. ®