'Test Like You Fly'? Yeah, we've heard of it 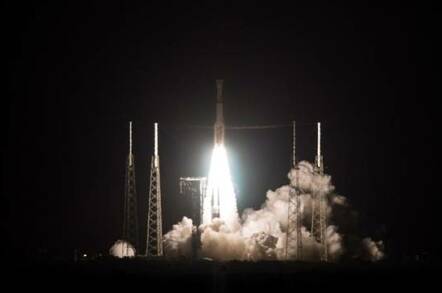 Roundup Quite a bit transpired in the world of rocketeering over the past few days, and The Reg has got all the highlights.

DSCOVR satellite back in business after a quiet nine months

There was good news for space weather watchers this week as the DSCOVR spacecraft was pulled out of a lengthy safe mode due to an issue with its attitude control system.

A flight software patch created by engineers from the National Oceanic and Atmospheric Administration (NOAA) and NASA to work around the problem has been successful, and officials declared the spacecraft "fully operational", having placed it into the safe mode on 27 June 2019.

DSCOVR was launched atop a Falcon 9 on 11 February 2015 and has sailed past its expected mission duration. Naturally scientists are keen to squeeze every last bit of data out of the thing and so engineers have patched around failing components to keep the science flowing.

Located at the Lagrangian point L1, the spacecraft's prime mission is to provide early warning of coronal mass ejections. It also performs Earth and climate observations.

While it was busy imploding and exploding its latest Starship prototype, SpaceX also picked up a Falcon Heavy order from NASA for the agency's Psyche mission. Aiming for launch in July 2022 from Launch Complex 39A in Florida, the Psyche mission will send a probe to a metal-rich asteroid which orbits the Sun between Mars and Jupiter.

Falcon Heavy will launch @NASAPsyche! The mission, for which @NASA requires the highest level of launch vehicle reliability, will study a metal asteroid between Mars and Jupiter to help humanity better understand the formation of our solar system’s planets https://t.co/mvrgx6dvaW pic.twitter.com/FqMaRKscQ4

The total cost for NASA to ride on Musk's mighty missile comes to $117m and includes the launch service itself and other mission-related costs. It also includes a pair of secondary payloads: Escape and Plasma Acceleration and Dynamics Explorers (EscaPADE), which will study the Martian atmosphere, and Janus, which will study binary asteroids.

The spacecraft is due to arrive at the asteroid (also called Psyche) by 2026, after an electric cruise lasting three-and-a-half years. It will also perform a flyby of Mars in 2023. Between 2026 and 2027 it will orbit the asteroid to determine if Psyche "is a core, or if it is unmelted material" and how old the thing is.

As well as carrying an array of instruments, Psyche will also test a laser communication technology for transmitting data to earth. Boffins hope that using light rather than radio waves will mean more data can be sent in the same amount of time.

Embattled aviation giant Boeing gave an update last week on just what the heck went wrong with its Calamity Capsule, the CST-100 Starliner, during 2019's launch.

Boeing vice president and program manager John Mulholland put on a brave face and pointed out what went well, but it was the faults that led to the Starliner failing to reach the International Space Station (ISS) and a thruster issue that could have caused a potential loss of vehicle that caught the attention.

The latter was caused by spacecraft's propulsion controller not being available for testing (it was being used in a hot fire test of the service module). The gang made do instead with what Boeing described as an "incorrect emulator" which didn't have the correct jet mapping. It was only once the mission was under way and the hardware returned to the lab that the team could re-run the test and discover the issue. A hurried patch was uploaded.

The approach to testing was eye-opening. It transpired that Boeing had not run an end-to-end test of the entire mission, opting to segment things instead. As far as the timer issue was concerned, where the Starliner's clock was set incorrectly and the ISS docking cancelled, the company had elected to end the test segment concerning launch at the point of spacecraft separation. A few more minutes of testing would have shown the problem.

Ouch. A better approach to testing was clearly needed and we hope the company has flung up a few "Test Like You Fly" posters up around its facilities.

As for when a crew might ride the Calamity Capsule, "that is a NASA decision to make." ®