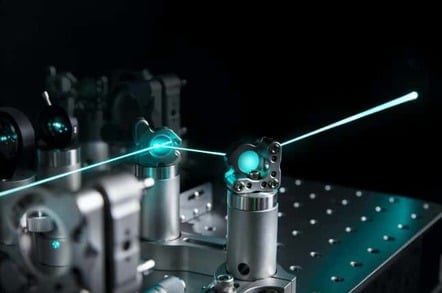 Honeywell International, a business known to most folks mainly for its thermostats, claims to have achieved a breakthrough in quantum computing.

On Tuesday, the American mega-manufacturer plans to announce that within three months, it will offer cloud-based access to the world's most powerful quantum computer, as measured by Quantum Volume.

Honeywell's unnamed machine is based on its quantum charge coupled device (QCCD) architecture, described in a research paper titled, "Demonstration of the QCCD trapped-ion quantum computer architecture." The paper will be made available through e-print service arXiv.

The contraption uses electromagnetic fields to trap ions so they can be manipulated with laser pulses. This approach, the company claims, produces more predictable errors than other qubit technologies that don't use atoms directly.

That doesn't mean quantum computers will be any more meaningful to the general public or businesses than they are now. Despite Google's recent claim to have achieved Quantum Supremacy – the ad-slinger said its 54-qubit quantum computer could perform a specific calculation in 200 seconds that would require 10,000 years on a classical computer, or 2.5 days by IBM's adversarial calculation – quantum devices are still mainly for academic research and government money.

A US National Academies of Sciences, Engineering, and Medicine report on quantum computing from December 2018 said it is "highly unexpected" a quantum computer will be able to crack RSA 2048-bit encryption within the next decade, for instance.

It's tempting to suggest that with Quantum Supremacy unlocked, we've reached Quantum Recumbency, during which we recline and await the Quantum Coming to arrive.

But in a phone interview with The Register, Tony Uttley, president of Honeywell's Quantum Solutions group, argued that businesses should start experimenting, to understand how they can utilize quantum computing and train their workers.

"This is not a science project," he said. "We are doing this to be able to demonstrate true value creation for the organizations we're working with."

Honeywell, he said, is testing the technology for molecular development its chemical catalyst business and for route problems in its aerospace business.

By advancing the state of the art and committing to increasing its hardware's Quantum Volume by an order of magnitude every year for the next five years, Honeywell is making it clear it wants to help shape this nascent market.

The biz, which operates groups focused on aerospace, building technologies, safety and productivity, and materials tech, publicly entered the quantum market in 2018 and partnered with Microsoft in 2019 to be part of its Azure Quantum stack.

Uttley explained he gets asked about thermostats a lot, which he attributes to people not understanding the breadth of Honeywell's business and the expertise required to construct a quantum computer.

"To build any quantum computer takes expertise in vacuum systems, magnetic field systems, lasers, phonics, and the like," he explained. "These are all underlying technologies that Honeywell has had for decades through its aerospace and materials science businesses."

About a decade ago, he explained, Honeywell recognized it had the tech required to create a quantum computer and set a series of milestones to make that happen.

Uttley said Honeywell's quantum computer doesn't have a catchy name. That's perhaps because it isn't something customers will purchase. They'll access it through Microsoft Azure Quantum as a service. No price has yet been determined.

In an email to The Register, Thomas Schenkel, interim director of accelerator technology and applied physics division at Lawrence Berkeley National Laboratory, said that while getting more qubits to work together will eventually lead to solving certain kinds of problems faster than a classical computer, the number of qubits alone is not everything.

"Gate fidelity (how precise the operations are conducted), coherence time (how long a calculation can run before the precious quantum states couple too much to the environment) and connectivity (how qubits are linked up, e. g. nearest neighbor of higher levels of connectivity) also matter a lot," he said. "This is an intense race now and there will very likely be many winning technologies because they can be adapted to special problem areas."

Schenkel said there's a lot of debate about how to move forward.

"Silicon-based qubits, like quantum dots or donor atoms with qubits based on electrons and their spins, have long been hailed as highly scalable due to the fabrication finesse of the semiconductor industry," he said. "But scaling has proven very tricky and slower than expected following basic demos with one or two qubits over the last decade."

The recent entrance of experts in high-end semiconductor fabrication, said Schenkel, could help the field advance more quickly, though he sees many challenges that have yet to be overcome, like noisy interfaces and too many wires. The major challenge ahead, he said, is making error correction work with thousands of qubits and that doesn't look likely soon.

"When Intel pioneered IC's some 50 years ago that did not mark the end of R&D in silicon electronics, au contraire," he said. "Having market success with early technologies will likely stimulate basic R&D and we very likely have not found the best way to build a quantum computer yet (likely far from it)." ®