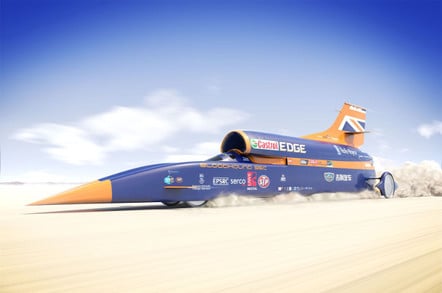 The Bloodhound Land Speed Record chaps have thrust out the begging bowl to raise funds for a bid to break the 1,000mph (1,609kph) barrier next year.

The car hit 638 miles per hour, or 1,010 kilometres per hour in new money, last summer pushed by an adapted Eurofighter jet engine. The team hopes to get back to South Africa and onto the Hakskeenpan track they built in the Kalahari Desert with the car powered by a new rocket.

To nudge it over 800mph (1,287kph), the team needs to get its hands on a Nammo rocket built to punt small satellites into orbit for the European Space Agency.

The Norwegian-designed compact rocket uses hydrogen peroxide as a propellant. This is pumped at high pressure through a silver gauze causing it to split into 600°C steam and oxygen. This pours out a nozzle at 2,000mph (3219kph) to generate the necessary thrust.

Hydrogen peroxide is quite happy at temperatures of around 20°C – typical for winter in Hakskeenpan through July, August and September.

Bloodhound CEO Ian Warhurst, who bought the car and put his own cash into the initial rescue effort, said: "The clock is ticking to raise the necessary investment to regroup the team and crack on with the rocket programme and other car upgrades in time to hit our 2021 deadlines. If we miss our cool weather window in July and August, temperatures in the Kalahari will make running a rocket untenable next year."

Bloodhound needs to get money in by the end of March in order to get everything ready for summer 2021.

"The project remains dormant whilst we try to secure the funding but at a cost of tens of thousands per month of overheads, and the threat that we miss the weather window next year, we cannot remain dormant for long. After all that this project has achieved in the past year to prove its viability, it would be devastating to end here when we are so close. We remain optimistic but really are running out of time."

Warhurst promises sponsors a generous return on their investment in terms of publicity, especially should the team beat the current world record. ®