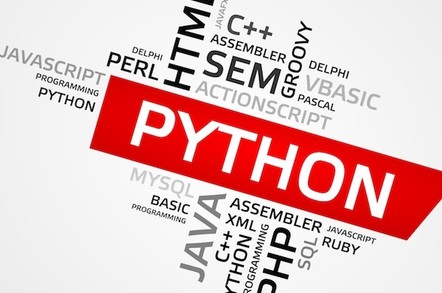 JavaScript meanwhile has maintained its position at the top of the chart, as measured by the number of StackOverflow tags and the number of public projects based on the language stored with GitHub.

Redmonk's biannual survey of programming language popularity makes no pretense at being a definitive ranking of worldwide popularity or overall industry usage. It's simply a measurement of available data that provides a sense of language trends.

Code communities that exist outside of StackOverflow, such as Mathematica, the consultancy notes, may be underrepresented.

With caveats about the statistical limitations of the survey in mind (and forbearance with regard to the non-sequential ranking scheme adopted by Redmonk), the latest iteration of the top 20 list reads as follows, with duplicate numbers representing parity in popularity:

Redmonk co-founder Stephen O'Grady observes that Python's ascendance marks the first time since 2012 that a programming language other than Java or JavaScript has occupied the number two slot.

Python has seen its popularity grow thanks to its accessibility and its utility for scientific and AI-oriented programming. A survey by GitHub offered similar results back in November, which isn't surprising given the presumed data set overlap.

TypeScript, a superset of JavaScript that supports typed data, continued its rise, having broken into the top 10 first in June 2019. That ended five years where the set of top 10 languages remained unchanged (though positions within that group shifted).

"TypeScript is buoyed by both its ability to intermingle with a large existing codebase in JavaScript and its potential ability to make the resulting code safer," O'Grady observed.

R, Python's nerdier data-focused rival, also made a strong showing, rising two places in the ranking. O'Grady argues that given its specialized nature, R's popularity has probably hit its ceiling.

Go managed to improve its position, but O'Grady suggests the Google-backed language has hovered in the mod-teen ranks for several years and like R appears unlikely to change much in the near-term.

Rust, also oriented toward systems programming, has a reputation for being more difficult to learn than Go. Though it offers stronger protections against certain kinds of errors due to its unique design, its popularity, at least by Redmonk's measure, has remained flat.

Looking ahead a few years, Rust could make some gains if the programming language preferences of the Google team developing Fuchsia, the company's nascent multi-device operating system, resonate with the broader developer community. Rust has been approved for developers working on Fuchsia's Zircon kernel while Go has been rejected for anything except the operating system's Go-based netstack (and the hope is to get rid of Go there too).

Speaking of Fuchsia, Redmonk observed a significant uptick in Dart's popularity. The language, which can be compiled into JavaScript, reached rank 24, up from rank 33 only 18 months ago. O'Grady attributed Dart's surge to interest in Flutter, a UI toolkit for building cross-platform desktop, web, and mobile apps that relies on Dart.

Given that Dart is one of the approved languages for Fuchsia app development, it could become more popular still if and when Google releases a stable, consumer-oriented version of the operating system.

That's expected to happen within three years. Last year, Google hired Apple engineer Bill Stevenson to help launch Fuchsia. Currently, the operating system can be installed on a 64-bit Intel machine with at least 8GB of RAM, though it's in an unfinished state. ®