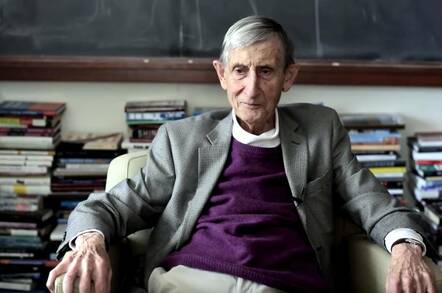 Video Freeman Dyson, the eminent British-American physicist and mathematician best known for his theoretical work in quantum electrodynamics, died today. He was 96.

His death was announced by his daughter Mia Dyson via Maine public television and the Institute of Advanced Study (IAS) – the top research hub in Princeton, New Jersey, once home to Albert Einstein, John von Neumann, J. Robert Oppenheimer, and other giants of science and technology.

Mia said her father accidentally fell on Wednesday during one of his regular visits to his office at the IAS, where he had worked from 1953 until 1994. He died from his injuries at a hospital on Friday morning.

“No life is more entangled with the institute – and impossible to capture — [he was an] architect of modern particle physics, free-range mathematician, advocate of space travel, astrobiology and disarmament, futurist, eternal graduate student, rebel to many preconceived ideas including his own, thoughtful essayist, all the time a wise observer of the human scene,” said Robbert Dijkgraaf, the Director and Leon Levy Professor at the IAS. “His secret was simply saying 'yes' to everything in life, till the very end.”

Dyson was born on December 15, 1923 in Berkshire, England, and read mathematics at Trinity College, University of Cambridge, aged 17. During the Second World War, he was pulled from academia to work as a scientist helping Blighty's Royal Air Force target German aircraft. After the war, he returned to Cambridge to complete his degree.

In 1947, he moved to the United States to obtain a PhD at Cornell University, studying alongside Hans Bethe, one of the pioneering nuclear physicists who played a crucial role in America's top-secret atom-bomb-building lab in Los Alamos, New Mexico.

"I came to Cornell to work with Hans Bethe, who was one of the greatest physicists in the world," Dyson said in a wide-ranging interview in 2008.

"He was right there at Cornell. He had been second-in-command at Los Alamos. It was just an ideal situation. In addition to Hans Bethe, there were many other Los Alamos veterans, who were then only about thirty years old, Feynman, and Phil Morrison, and Bob Wilson. Bob Wilson was chief of experimental physics, Bethe was chief of theoretical physics, and Phil Morrison was actually the fellow who carried the plutonium core to Tinian for the Nagasaki attack, so he was deeply involved in the business. Phil Morrison also visited Hiroshima very soon after it was destroyed.

"So there were those three people who were leading lights, who had been deeply involved at Los Alamos. I learned everything right from the horse's mouth."

And with that knowledge, Dyson soon disapproved of nations stockpiling nuclear weapons, noting:

If the United States gets attacked with a nuclear weapon, it won’t be from a government at all, but it will be a bunch of bad guys carrying a weapon in a suitcase or in a car or in a truck or something of that kind. You won’t even know where it comes from. That’s by far the most probable danger to the United States. That danger you don’t deal with by deterrence at all, so from that point of view it’s irrelevant how much we have ourselves. It’s also possible one of our own weapons gets stolen and used against us. That’s another reason for not having them.

You can watch the full interview below...

Dyson applied his mathematical wizardry in many areas in science, from particle physics and astrophysics, to space travel, biology, and tackling climate change sans hysteria. He earned a ton of awards, almost too many to list, and was a professor emeritus at Princeton, and a member of various scientific organizations.

His biggest contribution, in this vulture's mind, was uniting mathematical formulations describing interactions of subatomic particles with the squiggly lines of Feynman diagrams. He also came up with the additive number theory technique dubbed Dyson's transform, star-harvesting Dyson spheres that featured in Star Trek, and more.

"You could tell that the world was a beautiful place through his eyes, and somehow understanding all the formulas and the natural laws and all the mysteries he had plumbed through the study of physics, that it only grew more and more beautiful, the more he understood," Mia Dyson said today.

Dyson leaves behind his wife of 64 years, Imme, and six children. ®

Carbon reduction without the dodgy renewables?

'I'm dying to get into space but can't afford it'

Talk about pushing the envelope

Spooks, spyware, Ashley Madison and Windows 10: What you read in 2015

Ten of the best from your favourite tech site (and ours)

Star Trek's Enterprise turns 50 and still no sign of a warp drive. Sigh

Star Trek @ 50 Realistic tech or lazy plot device – what do you think?